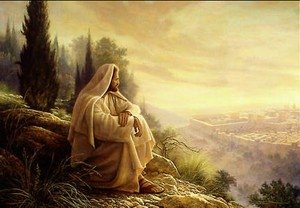 A recent visitor to our site wrote a note on the blog challenging my take on the Olivet Discourse. The argument was made that in Matthew 24:29, when Jesus said “immediately after the tribulation of those days, the sun will be darkened…” that the word “immediately” does not indicate that the parousia was to be, well, immediately. The argument was made that the word translated as immediately (eutheos) actually implies a gap of time. In my response, I took note that this is simply not supported by the lexicons.The “objector” has now responded and said that: “Clarification appears to be in order. Perhaps to say that (eutheos)  ‘implies a gap’ is too strong.”

I truly appreciate the tenor of the objector. The objector then proceeds to offer some examples that he believes prove that eutheos will allow for a gap– of so far 2000 years– between the Tribulation and the parousia. I will take up those examples in later installments. I want to deal in this article with a basic presupposition that underlies most attempts to interpret the Olivet Discourse.

One of the most fundamental, and commonly held views about the Olivet Discourse is that it speaks of two events: The fall of Jerusalem in AD 70,  and then, the Second Coming, which is supposedly in our future at the end of the Christian age. This is the view I personally held for a good bit of my life, but, on closer examination, found it to be without merit, and based on faulty presuppositions.

One of the first presuppositions is that the disciples asked Jesus about the end of the world, but this is a false assumption. The problem is that the text does not allow this, without inserting that concept into the text (eisegesis).

There is no doubt– and this is almost universally admitted–that in their mind, the disciples linked the impending destruction of Jerusalem and Christ’s coming at the end of the age. Unfortunately, the vast majority of commentators claim that the disciples were confused, or, that they were simply wrong to make that connection. I suggest that it was not the disciples who were / are guilty of confusion! Scripturally, the end of the age and the judgment of Jerusalem are siamese twins that cannot be separated. See my book, We Shall Meet Him In The Air, the Wedding of the King of kings, for a wealth of information documenting this connection.

The Olivet Discourse: Were The Disciples Confused?

The fact is that, while it is clearly true that the disciples did not understand much of what Jesus said, when it came to the connection between the end of the age and the judgment of Jerusalem, they were not in fact, confused at all. And we have proof of that from their own lips, in response to a specific question from Jesus about that very connection!

So, Jesus said his coming at the end of the age, would be in fulfillment of Daniel 12. But, Daniel 12:6-7 specifically said that those events– inclusive of the Tribulation- would be “when the power of the holy people is completely shattered” (v. 7).

Notice that Jesus then continued his discussion of the end of the age. Then, in v. 50, Jesus specifically asked his disciples “Do you understand?” And they said “Yes!” So, in Matthew 13 Jesus said that his coming at the end of the age would be in fulfillment of Daniel 12. Daniel 12 posited that end at the destruction of Old Covenant Israel– just like Jesus was predicting in the Olivet Discourse! Jesus asked the disciples if they understood what he was saying about his coming at the end of the age– when Israel would be destroyed, and they said “Yes!”

Now, there is not one word in Matthew 13– or the Olivet Discourse— to suggest that the disciples did not, after all, understand. So, since they said they did understand when Jesus tied the fulfillment of Daniel 12 to his coming at the end of the age, we have no right, no authority, no evidence to deny their affirmation! And this means that in Matthew 24, the disciples were not even asking about any so-called “end of time” or literal, bodily, physical coming of Jesus out of heaven, as a 5′ 5″ Jewish man, riding on a literal cloud! They knew– from the OT scriptures, that the coming of the Lord was when He used one nation to judge another, just as He had in the fall of Jerusalem in BC 586.

What all of this suggests is that attempts to divide topics in the Olivet Discourse are misguided, and based on false presupposition. The disciples did not ask about such a thing, and Jesus never discussed such a thing.

We will have much more in following articles, as we respond specifically to some of the points offered by the objector. So stay tuned!

I have much more on whether the disciples were confused in the Olivet Discourse, in this article.

2 Replies to “The Olivet Discourse – Fulfillment When?| A Response to A Poster- #2”