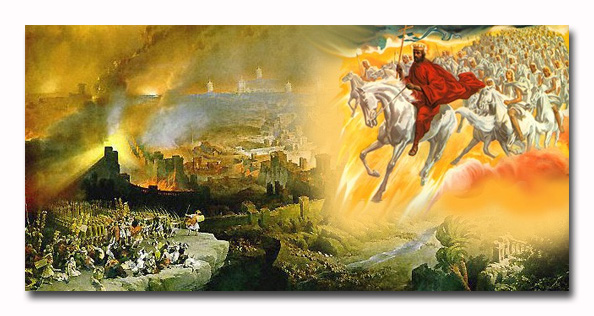 We are examining some claims by a visitor to our site. The claim has been made that the Olivet Discourse speaks of two different events: The fall of Jerusalem in AD 70, and, the final coming of Christ at the end of this age. Be sure to read this entire series, beginning here: #1  —  #2” href=”http://donkpreston.com/a-response-to-a-poster-the-olivet-discourse-fulfillment-when-2/” target=”_blank”>#2

In my previous article, I noted that this position is based on a presupposition that the disciples asked about the end of the Christian age. This claim has no support other than preconceived ideas about the “end of the age.”

The Olivet Discourse and the End of What Age?

Consider this: It was Jesus’ prediction about the destruction of the Temple and judgment on the city that prompted the disciples’ question about the parousia and the end of the age. So, as noted previously, in their mind, the end of the age and the destruction of the temple were inseparably linked. But ask yourself: What age did that temple represent? Did it represent the current Christian age? Patently not! Did it in any way represent or symbolize the Christian dispensation? Not in any way whatsoever! Be sure to read my book We Shall Meet Him In The Air, the Wedding of the King of kings, for a full discussion of the unity of the Olivet Discourse, and its exclusive application to the end of the Old Covenant age in AD 70.

As I noted in #2” href=”http://donkpreston.com/a-response-to-a-poster-the-olivet-discourse-fulfillment-when-2/” target=”_blank”>the previous article, the majority of commentators believe the disciples were confused or simply wrong to make that connection. However, as we showed, in his parables in Matthew 13 Jesus spoke of his coming at the end of the age, and asked the disciples if they understood his application of Daniel 12 to that time. They said “Yes.” Jesus did not, in any way, reject their statement. We therefore have no authority or evidence to claim that in fact they did not truly understand Jesus’ application of Daniel to the end of the age.

The Olivet Discourse and Matthew 13– One Eschatology!

In response, the Objector has made some rather amazing claims. He says: “I don’t see much ‘eschatology’ in Matthew 13, as some do…Moreover, the details of Jesus’ Matthew 13 parables that touch on the end are scant at best, and certainly seem as if they could be construed generally, as framing or outlining the other prophecies, rather than the technical equating of the particular points as you are doing.  The specific reference in Matthew 13 you listed does talk about the end of the age, but your specific Daniel 12 references are inconclusive.”

To suggest that Matthew 13 is not particularly focused on eschatology is quite remarkable. Take note of a few facts:

1.) In his parables, Jesus is speaking of “the end of the age.” He uses the identical distinctive Greek term “sunteliea tou aioniou” in chapter 13 that the disciples use in Matthew 24:3 when they ask about the end of the age. To suggest therefore, that Matthew 13 is not particularly eschatological is specious and tenuous. To suggest that it is not the same “end of the age” as in the Olivet Discourse has not linguistic or contextual support. Matthew 13 is thoroughly eschatological.

3.) Matthew 13 speaks of the time of the harvest. This is the resurrection, and thus, purely eschatological. It is the gathering of the elect of Matthew 24:31.

4.) I noted that Jesus said the end of the age would be when “the righteous shall shine forth as the sun in the kingdom” a direct allusion to Daniel 12:3. But, Daniel 12:2-4 predicted the resurrection (the harvest of Matthew 13, and the gathering of the Olivet Discourse), the time of the kingdom, and, the end of the age of which Jesus spoke. (The LXX even uses a form of the distinctive term for the end that Jesus used). Thus, there is a direct connection, and Jesus was saying that Daniel’s prophecy would be fulfilled.

5.) Jesus’ comments on the end of the age are not all that “scant” as claimed by the Responder! He repeatedly speaks of “the end of the age”, and, his rather lengthy parable of the Wheat and Tares is one of his longest parables! Thus, to suggest that somehow Matthew 13 is not sufficiently detailed as to allow us to draw conclusions from it– especially in light of its perfect correspondence to the Olivet Discourse, and Jesus application of Matthew 13 to Daniel, it seems rather disingenuous at best, to negate the eschatological significance of Matthew 13.

The “Objector” has responded by claiming that the angel’s question was not related to the events of the end, but rather events in the middle of the vision way back in chapter 11:
“I only remind you of what I’m sure you’re aware, but Daniel 12:2-3 do not need to follow directly on the heels of Daniel 12:1.  As the body of the prophecy is in Daniel 11, the last few verses of it, Daniel 12:1-4, point to the very distant future for Daniel, and, ends with the sum total of all things at the very end, whenever that is.  The need to connect that, then, with Daniel’s then later interest in Daniel 12:7 comes at the expense of the fact that this is exactly Daniel has been doing all along…  He sees something, and then asks for more detail about something in the middle of the vision, not adding to the end.

My response is that “No, I am not aware that Daniel 12:2-3 need not be connected to Daniel 12:1.” This is another remarkable claim that I find no support for in the text and context.

There is a remarkable fact found in the OT (and New) that is mostly overlooked by the commentators. That fact is that Biblically, the Tribulation and the Resurrection are absolutely tied to each other temporally. The resurrection is the climax of the Tribulation!  (Brant Pitre does a great job of explicating this, however, in his book Jesus, the Tribulation and the End of Exile, (Grand Rapids, Baker Academic, 1975). There is no justification for positing a huge temporal gap between these two events. (I am currently writing a book on Daniel 12 and am documenting this connection extensively. It is an undeniable truth).

The second fact, directly from the context, is that there is no justification at all for saying the angel is ignoring the events of 2-4, and jumping back to events in chapter 11 when he asks, “when shall these things be?” Where are the linguistic markers delineating this? They are not there. Where does the angel say, hint or imply that he is not asking about the immediate antecedents to “these things” and “all of these things”? He does not. Those making the claim that “all of these things” does not include the events of vss. 1-4 bear the responsibility and burden to prove that claim with textual and contexual evidence. But that evidence is not there.

The point of the angel’s question concern’s the entire vision. There is not a hint of a suggestion that the angel is focused on only one part of the vision as opposed to others. There is no grammatical suggestion that he is divorcing “all of these things” from the resurrection, the kingdom, the time of the end” – the climax of the vision– and asking about things unrelated to the very things that have just been mentioned.

There is not one word of qualification that would demand– or even suggest– that “all these things” actually means “some of these things,” and those things are not the immediate antecedent things, but only some of the things mentioned much earlier.

Only a presuppositional approach to the text would divorce “all of these things” from that immediate antecedent discussion and apply it to only “some things” said much earlier, when there is no indicator of such a dichotomization.

In the Olivet Discourse, Jesus foretold the Tribulation foretold by Daniel (Matthew 24:15, 21f) and emphatically said it, along with his coming would be in his generation (24:21, 29-34).

Our Responder, remember, has tried to dichotomize between these events, claiming that verse 36 of Matthew 24, “specifically excludes v. 29-31 events from the v. 34 genea, ‘These things will happen within a generation… but that day’s day and hour are unknown… ‘that day’ can only refer to the v. 29-31 events, since the rest of the events are not single day-and hour-things, but general conditions leading up to the fall.”

So, our Objector, is saying that “these things” of verse 34 cannot refer to “that day and hour” of v. 36, and that this means that verses 29-31 are excluded from Jesus’ referent to “this generation.”

This is an unwarranted claim. I will examine this claim in the next installment, so stay tuned!

The Olivet Discourse and Immediately

Let me close with just a thought on the word “eutheos” which the Responder has claimed can allow for a period of time between the events prior to Matthew 24:29 and the parousia.

The claim is made that the word eutheos, means straight (in its primary definition this is linguistically correct). The claim is then made, by examining some texts where there was a short period between the “immediate” and the actions, that this proves that in Matthew 24:29f there has been, (and must be!) so far, a gap of 2000 years. This is a logical fallacy.

Let me reiterate that I have not found a single Bible translation to support such a claim. So, the world’s best Greek experts believed that the proper translation is “immediately.” Remember, this is not commentary, or interpretation, it is definition.  The burden of proof therefore lies on the Responder to prove that “immediate” is not the best translation and that “immediately” must bear the idea of a long, interim gap. Linguistically, this is untenable.

Second, while examining other texts is certainly a solid hermeneutical practice, it is not linguistically sound or proper to say, “Well, I know that the meaning of the word is ‘immediate’ but, I have found a couple of examples where it cannot mean immediate, therefore, I am setting aside the normal definition and imposing that exceptional definition on the word.” This is an illegitimate transfer of context. The subject matter in the texts offered as exceptions is different from the Olivet Discourse. Therefore, it is hermeneutically improper to impose those contexts onto Matthew 24.

The implications for our understanding of the Olivet Discourse and eschatology are very clear. The normal linguistic meaning of eutheos (immediately) negates any attempt to delineate between “those days” and “that day and hour” except to allow and to show that “those days” would lead up to and climax in “that day.” Honoring the “immediate” definition of eutheos honors Jesus’ emphatic statement that “all of these things” would be fulfilled in his generation.

One Reply to “The Olivet Discourse – Fulfillment When?| A Response to A Poster – #3”