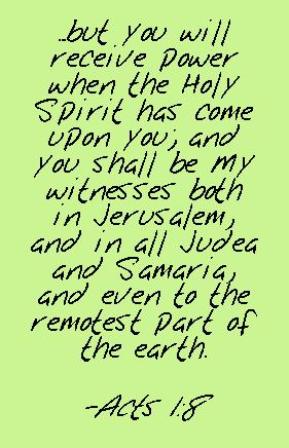 In Acts 1, Jesus’ disciples asked him, “Will you at this time restore the kingdom to Israel?” It is often assumed that the disciples were asking about the national restoration of Israel. It is likewise claimed that Acts 1 shows that the kingdom was not near, because Jesus told the disciples “It is not for you to know the times and the seasons.

Acts 1 is, interestingly, a text that commentators struggle with when it comes to eschatology. The respective eschatological paradigms have a tendency to view the disciples’ question regarding the establishment of the kingdom in one of two ways:

1.) The millennialists insist that since the disciples asked about the restoration of the kingdom of Israel, that they retained their nationalistic hopes, but, Jesus’ answer supposedly informed them that the promise of the kingdom had now been postponed. In a four night formal debate in Memphis, Tenn. (May 1-4, 2007), my opponent, Michael Bugg, insisted that Acts 1 proves the disciples were still expecting the restoration of national Israel, but that Jesus informed them it had been postponed.

While this article could become quite lengthy, I will confine myself to making a very few salient, but powerful points.

1.) Regardless of their concepts of the kingdom in Acts 1, the context proves that Jesus was very powerfully telling them that the establishment of the kingdom had not been postponed, and that the time for its initiation was near.

2.) That since the initiation of the kingdom was near, this demands that the parousia of verses 9-11 would occur in that generation as well.

Acts 1, the Spirit and the Old Covenant Background

When one examines the OT prophecies of the outpouring of the Spirit, there are several things that are easily established:

Many commentators take note of the fact that Jesus, in direct response to the disciples’ question about the kingdom, said, “You shall receive power when the Holy Spirit has come upon you; and you shall be witnesses to Me in Jerusalem, and in Judea, and Samaria, and to the end of the earth” (Acts 1:8, NKJ). He had also just told them to go to Jerusalem and await that outpouring: “And being assembled with them, He commanded them not to depart from Jerusalem, but to wait for the Promise of the Father, ‘which,’ He said, ‘you have heard from Me, for John truly baptized with water, but you shall be baptized with the Holy Spirit not many days from now” (Acts 1:4-5). Were Jesus’ words intended to chastise the disciples for their misunderstanding, or to tell them that the kingdom had in fact been postponed? Neither! Jesus’ words, when properly understood, were powerful indicators that the kingdom was about to be initiated!

Acts 1:  The Holy Spirit and “This Is That Which Was Spoken!”

On the day of Pentecost, the Spirit– promised in Acts 1 and in Joel, was miraculously poured out, manifested in the speaking in tongues on the part of the disciples (Acts 2:1-5). Now, unless one is willing to completely divorce the events of Acts 2 from Jesus’ promise in Acts 1, then patently, Acts 2 must be seen also as the fulfillment of John’s promise in Matthew 3, as seen just above. But of course, that is not all.

In response to the spectacular and stunning display of the Spirit, the apostles were accused of being drunk. Peter’s response dispelled that charge:
“17  And it shall come to pass in the last days, saith God, I will pour out of my Spirit upon all flesh: and your sons and your daughters shall prophesy, and your young men shall see visions, and your old men shall dream dreams: 18  And on my servants and on my handmaidens I will pour out in those days of my Spirit; and they shall prophesy: 19  And I will shew wonders in heaven above, and signs in the earth beneath; blood, and fire, and vapour of smoke: 20  The sun shall be turned into darkness, and the moon into blood, before that great and notable day of the Lord come: 21  And it shall come to pass, that whosoever shall call on the name of the Lord shall be saved.”

In virtually all circles, it is acknowledged that Joel 2 foretold the establishment of the Davidic kingdom. The out pouring of the Spirit was to be a sign of that great event. Of course our millennial friends, due to their belief that the kingdom offer had been withdrawn and the kingdom postponed, insist that the events of Pentecost are unrelated to the prophecy of Joel. Fruchtenbaum says, “Virtually nothing that happened on Pentecost was predicted in Joel.”( “How the New Testament Uses the Old Testament”, Three page article sent to me by Thomas Ice). Dwight Pentecost, says that the events of Pentecost were not the fulfillment of Joel, but simply prove that Joel will one day be fulfilled. (Dwight Pentecost, Things to Come, (Zondervan, Grand Rapids, )470). In a radio debate with Thomas Ice, I cited a work Prophecy Watch, that he co-authored with Timothy Demy. ( Prophecy Watch, Thomas Ice and Timothy Demy, (Eugene, Or., 1998)137). In that book, it says that Joel “partially fulfilled at the day of Pentecost.” When I gave that citation, Ice vehemently denied believing that Joel was, in any way, fulfilled on Pentecost.  When I documented, in follow-up private correspondence, that I had not misrepresented the quote, Ice admitted that I had cited the book correctly, but that he did not believe what was in the book that he had co-authored.

In an email exchange, I invited Thomas Ice to debate me publically, again, in Carlsbad, N. M., in 2008. His rather curt response was “Don, No.” His reason was that I constantly misrepresent him–in fact he called me a “liar”– and the key area of his accusation was that I twist his words on Joel 2. Ice claims that I tell people that he and other dispensationalists specifically say that Peter said, “This is not that which was spoken by the prophet Joel.” As already noted, I have never accused Ice or any other millennialist of using those specific words. What I have and do say is that their position on Acts 2 and Joel, their denial of fulfillment of Joel, their obfuscation when pressed to explain what Peter might have really meant, and their over all refusal to deal with Peter’s emphatic words, demands that while they may not use the specific words, “this is not that which was spoken by the prophet Joel,” they do not believe or accept Peter’s words, “this is that which was spoken by the prophet Joel.” This was proven by the correspondence with Thomas Ice.

The reader has to see how devastating Peter’s emphatic statement really is. If Peter was declaring that the outpouring of the Spirit was in fact the fulfillment of Joel, then the entire house of cards called dispensationalism comes crumbling down. Now, since Peter said “this is that” and did not use any of the Greek words for “like that” or “similar to that”, and since he certainly did not say “this is not that” we can safely conclude that his words, “this is that” truly meant, “this is that which was spoken by the prophet Joel.”

Since the promise of Matthew 3, as shown, was inextricably linked with the establishment of the kingdom and fulfillment of Joel, this proves beyond all dispute that the outpouring of the Spirit on Pentecost was not the sign of a postponed kingdom, but was, in fact, the sign that the kingdom glory was near!

It is only by ignoring or denying the relationship between Acts 1, Matthew 3 and Joel, that one can deny that Acts 2 was the fulfillment of Joel. And this has, as we have already suggested, devastating implications for the millennial view.

If Acts 2 was the fulfillment of Joel, as Peter affirms, and as the connections with Acts 1 and Matthew 3 confirms, then there was not postponement of the kingdom on Pentecost. There was no delay, no establishment of the church as an emergency interim measure, unforeseen by the O. T. prophets. All was on schedule. All was as God originally planned. And, this is confirmed even further by a brief look at something else Peter said on Pentecost. We will do that in our next installment on Acts 1.

Be sure to read my book Like Father Like Son, On Clouds of Glory, where I discuss Acts 1 and the Kingdom in-depth.