He Came As A Thief! — A Short Shot

We are constantly told that Jesus’ reference to his coming as a thief demands that it could not be referent to his coming at the end of the Old Covenant age in AD 70.

However, consider the following “short shot.” from Revelation 3:1-3:
‘These things says He who has the seven Spirits of God and the seven stars: “I know your works, that you have a name that you are alive, but you are dead. 2 Be watchful, and strengthen the things which remain, that are ready to die, for I have not found your works perfect before [b]God. 3 Remember therefore how you have received and heard; hold fast and repent. Therefore if you will not watch, I will come upon you as a thief, and you will not know what hour I will come upon you.

Notice what Jesus said:
Jesus was going to come “upon you”– that is the Sardisian church of the first century– not an event 2000 years removed.

He would come on them as a thief— thus, the thief coming was to be in the first century.

He would come “upon you” at an hour when they did not know– proving that the coming at the unknown hour was still to be in the first century.

They were to be watchful for that thief coming, at the hour which they did not know, which links that coming directly to Matthew 24:42– which is a “second coming” text.

“Watch therefore, for you do not know what hour your Lord is coming.”

Matthew 24:42 is posited by almost all futurist paradigms as a “Second Coming” event. But, it is patently the same event as the thief coming in Revelation 3, which cannot be removed from its first century context. This means that “coming as a thief” coming of Christ in Revelation 3, at the unknown hour, is the thief coming of Christ at the unknown hour in Matthew 24. But, since that is true, this demands that the Lord’s coming as a thief in Matthew 24 was his coming in the first century generation– not an event in our future!

Get a copy of my book, He Came As A Thief, for more proof of this. 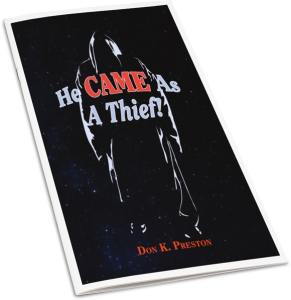