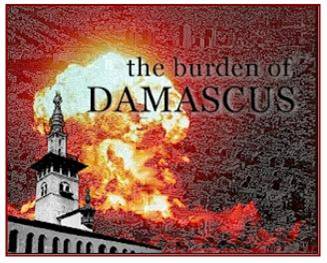 This is the third installment of Gary DeMar’s article on Isaiah 17. The prophecy pundits are claiming that we are in the last days and that we are about to see the total destruction of Damascus in Syria, in fulfillment of Isaiah 17, which is called the “Burden of Damascus” by the prophet. Be sure to read the previous two articles, as the foundation for this installment. Article #1   #2.

The Timing of Fulfillment For the Destruction of Damascus

“When” a prophecy is said to be fulfilled is very important to know in determining what events fulfill the prophecy. Time indicators can tell us if the prophecy is going to be fulfilled in the distant future or in the near future. Sometimes a prophecy’s fulfillment is open ended. The New American Standard has “Damascus is about to be removed from being a city” (Isa. 17:1). According to Oswalt in his commentary on Isaiah, the Hebrew construction “hinne-h . . . mûsa-r is a participial construction indicating imminent action, ‘Behold, Damascus is on the point of being removed.’”

Joel Rosenberg, who believes that Isaiah 17 is a prophecy that has not been fulfilled, appeals to other chapters in Isaiah in an attempt to make his case that the Damascus prophecy is like Babylon, never really fulfilled:

“In Isaiah 13, we read about the coming judgment/destruction of Babylon. But the context makes it clear that the prophecies will happen deep in the End Times, just prior to the Second Coming of Christ. In Isaiah 13:6, for example, we read, “Wail, for the Day of the Lord is near!” In Isaiah 13:9, we read, “Behold, the Day of the Lord is coming.” Both of these references indicate that the prophecies concerning the destruction of Babylon will occur in the last days leading up to the “Day of the Lord,” an eschatological biblical term that refers to the actual, literal, physical return of Christ to earth at the end of the Tribulation.”

How can a prophecy state that “the Day of the Lord is near” (Isa. 13:6) when, according to Rosenberg, the prophecy hasn’t been fulfilled yet? John Walvoord, who Rosenberg quotes approvingly, makes a valuable comment about the multi-faceted character and application of the “day of the Lord: “The ‘Day of the Lord’ is an expression frequently used in both the Old and New Testaments to describe any period of time during which God exercises direct judgment on human sin. The Old Testament records a number of times when Israel endured a day of the Lord, lasting a few days or, in some cases, several years.”

“Day of the Lord” is not code for “deep in the End Times, just prior to the Second Coming of Christ.” Consider these extended remarks by dispensational prophecy writer Ronald Showers on the meaning of “day of the Lord”:

Evidence for this significance of the Day of the Lord is found in references in the Scriptures to past Days of the Lord. The Bible indicates that there have been several past Days of the Lord in which God exercised and demonstrated His sovereign judgment on other nations. He raised up Assyria to judge the northern kingdom of Israel during the 700s B.C. (Amos 5:18, 20), Babylon to judge the southern kingdom of Judah during the 600s and 500s B.C. (Lam. 1:12; 2:1, 21–22; Ezek. 7:19; 13:5; Zeph. 1:7–13; 2:2–3), Babylon to judge Egypt and its allies during the 500s B.C. (Jer. 46:10; Ezek. 30:3), and Medo-Persia to judge Babylon during the 500s B.C. (Isa. 13:6, 9). (Note by Don K. Preston: For an extended discussion of the language of the Day of the Lord, and the nature of fulfillment, see my Like Father Like Son, On Clouds of Glory, book. It has a wealth of documentation confirming that the Day of the Lord never conveyed the idea of a literal appearance of God in bodily form).

Notice his statement about the judgment of Babylon in Isaiah 13, thus, contradicting Rosenberg’s claim that the Babylonian judgment is yet in our future.

Isaiah 13 is a description of a localized judgment of a world power that existed long ago. Who did God raise up to judge Babylon? “Behold, I am going to stir up the Medes against them” (13:17a). There are no Medes today. We know from Daniel that Darius the Mede conquered Babylon (Dan. 5:30–31).

To claim that after 2700 years the Damascus prophecy has not been completely fulfilled is to question the integrity of the Bible as skeptic Tim Callahan has done. “Being removed” does not necessarily mean “being removed forever.”

Note by Don K. Preston: DeMar has clearly identified one of the glaring and fatal issues in the Dispensational claims. Zionists totally ignore the Biblical time statements– not to mention the audience relevance– of the Biblical prophecies that they cite, in their mad dash to make the Bible apply to the current generation. This is as wrongheaded as can be.  Stay tuned for more from DeMar.