Did Isaiah Say Damascus Would Be Destroyed “Forever”? 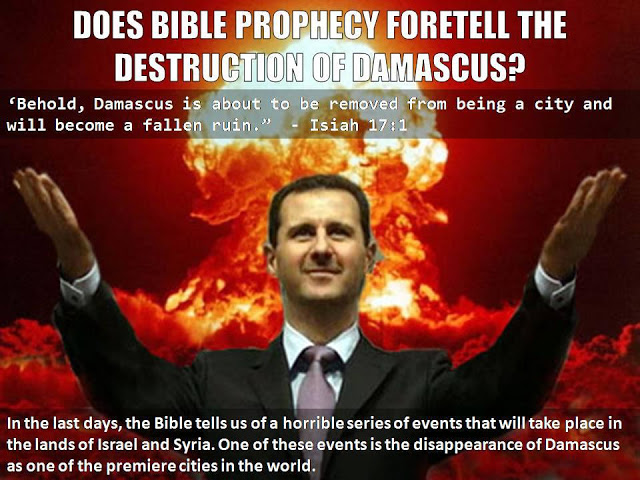 Be sure to read the first installment of an article we are sharing with our visitors, written by Gary DeMar, of American Vision. The would be “prophecy experts” tell us that we are about to see the destruction of Damascus, in Syria, as fulfillment of Isaiah 17. Demar –and I– rejects that claim, and gives a powerful article — which we have broken up into installments– explaining what the prophecy pundits are wrong…. again! Be sure to read the first installment.

In this installment, DeMar examines the claim that Damascus could not have been destroyed by the Assyrians under Tigleth Pileser, because Isaiah 17 says Damascus would be destroyed “forever” but, in Jeremiah we find another prophecy of her destruction, and, the city still exists today. So, did Isaiah predict the “forever” destruction of Damascus? Here is DeMar’s response to that claim. (Note, the Hebrew fonts in DeMar’s original article did not “cut and paste” so, where he gave the Hebrew, in the article below, you will see “????”. I apologize for this, but do not know how to overcome that. (Don K. Preston)

The first item that needs to be discussed in the addition of “forever” to the Isaiah 17:2 that is not found in the majority of Bible translations. The TIME magazine article offers this translation of Isaiah 17:1–2: “See, Damascus will cease to be a city and will become a heap of ruins. Her towns will be deserted forever.” I’ve checked numerous translations, and only a few include the word “forever.” The Revised Standard reads “her cities will be deserted forever,” while the New American Standard version includes a marginal note based on the Greek Septuagint (LXX) translation that includes the phrase “forever.” 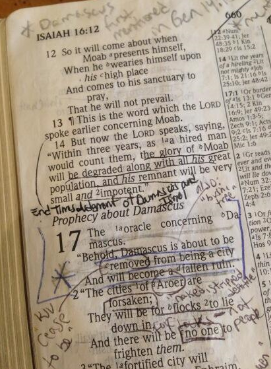 The inclusion of the word “forever” is based on the Septuagint (LXX) Greek translation of Isaiah 17:1–2 that reads as follows:

1. See, Damascus will be removed from among cities and will become a ruin,

2. abandoned forever, to be a fold and resting place for flocks,

and there will be no one to drive them away

The translations that do not include the word “forever” follow the Hebrew text. The LXX uses the phrase ??? ??? ????? (eis ton aio-na = “into the ages”) to translate a disputed Hebrew word. The “forever” translation is based on the Hebrew word “Aroer” which in other contexts is the name of a city.
Dead Sea Scroll_Isaiah 17

Isaiah 17:1-2 from the Isaiah scroll from the Dead Sea Scrolls

Other than the LXX, there does not seem to be any reason to adopt changing the Hebrew letters. These comments from the Pulpit Commentary are interesting and might shed light on the historicity of the city of Aroer as it relates to the Damascus prophecy:

Sargon’s annals tell us of a “Gal’gar,” a name well expressing the Hebrew ????, which was united in a league with Damascus, Samaria, Arpad, and Simyra, in the second year of Sargon, and was the scene of a great battle and a great destruction. Sargon besieged it, took it, and reduced it to ashes (‘Records of the Past,’ 50. s.e.). There is every reason to recognize the “Aroer” of this verse in the “Gargar” of Sargon’s inscriptions. They shall be for flocks (comp. Isaiah 5:17; 7:25). It marked the very extreme of desolation, that cattle should be pastured on the sites of cities. None shall make them afraid; i.e. “there shall be no inhabitants to make any objection.”

John N. Oswalt notes that the Hebrew construction “the cities of Aroer” constitutes “a very special wordplay”[14] that ‘adê ad (??? ???) does not give. So it’s most probable that the Hebrew is correct and the LXX’s reworking of the Hebrew is based more on an interpretive hunch than actual manuscript evidence.

Compare Isaiah 25:2 with 17:2 and notice that the Hebrew word olam is used for the word “forever” for an unnamed city:

For You have made a city into a heap,
A fortified city into a ruin;
A palace of strangers is a city no more forever [?????/olam],
It will never be rebuilt.

We know from the history of the period that a number of cities were destroyed never to be rebuilt, for example, Babylon:

And Babylon, the beauty of kingdoms, the glory of the Chaldeans’ pride, Will be as when God overthrew Sodom and Gomorrah.

It will never be inhabited or lived in from generation to generation;
Nor will the Arab pitch his tent there,
Nor will shepherds make their flocks lie down there  (Isa. 13:19–20).

The use of olam in a context that is very similar to what’s found in Isaiah 17:2 may be one of the reasons that the majority of translations stay with the Masoretic Hebrew text aro- ‘e-r (???????) instead of the LXX variation ??? ??? since ????? (olam) is the preferred word used by Isaiah when the destruction of cities and nations are in view.

So if the Hebrew is followed, there is nothing in Isaiah 17 that indicates that Damascus and its surrounding cities would be destroyed “forever.”

We will share more of DeMar’s article in the next installment.