Jesus and the Temple|

In our first installment on this topic we examined the Jewish mind-set in regard to the Jerusalem Temple. It is so sad that many in modern day Christianity simply do not grasp how important that Temple was, not only in the mind of the Jews, but, in the eyes of God as well! We sometimes read comments like this, from Wayne Jackson. He disparages the significance of the fall of Jerusalem as “one city in Palestine in AD 70” and then queries: “What would the destruction of Jerusalem have meant to those people who were living in Athens, Greece? Paul says, ‘Gentlemen, you had better repent.’ Why? ‘Because Jerusalem, hundreds of miles away is going to be destroyed in AD 70.’ They likely would have said, ‘So what!’ What does that have to do with us?” (The AD 70 Theory, (Stockton, Ca., Courier Publications, 1990)67, 79. – I must say, as kindly as possible, that Jackson’s book is one of the most illogical, poor attempts to respond to Covenant Eschatology that one will ever find).

Such a comment and question reveals either total desperation, total ignorance of the Jewish mind-set, or, a willingness to ignore the historical reality. In either case, Jackson’s comments and question have no scholarly merit to them. (I should note that in formal debate, my Amillennial opponents have repeated this kind of “argument.” In my formal debate with John Welch, (Indianapolis, 2008. MP3s of that debate are available from me), Welch put up a chart showing that Jerusalem was “hundreds of miles away from Jerusalem,” and asked, “Why would the Gentiles, hundreds of miles from Jerusalem care about the destruction of that Jewish city?” When I responded by asking why those same Gentiles should care about the death of a Jewish “rabble rousing, would be Messiah” on Golgotha, a shock went through the audience.” The point being that if Gentiles should not be concerned with the fall of Jerusalem because it was so far away, then they should have no interest or concern about the death of Jesus. The fact is that in prophecy, it was the end of the Old Covenant world that would fully open the way for salvation being offered to all men!)

As we work our way to a consideration of the topic of our title, and to consider Jesus and the Temple, I think it good to examine the impact of the fall of Jerusalem on the ancient Jews. Now, keep in mind that as the title above suggests, I will be examining Jesus’ statement in Matthew 12 that “one greater than the Temple is here.” This stunning statement must be seen with the backdrop of understanding the Jewish concept of the importance of that physical edifice, and therefore, what the impact of its destruction would be on that mind-set. But more, the question is, when we examine the Jewish concepts of the Temple, and the reaction to its destruction, when we look then at Jesus’ incredible claim, it raises the question of Christology in a powerful way! So, having seen how central to the Jewish mind the Temple was, what was – or what would be – the impact of the destruction of that Temple?

Jewish Reaction to the Fall of the Temple

Consider first of all Matthew 24:2-3. Jesus predicted the utter desolation of that marvelous Temple. In direct response the disciples ask “When shall these thing be, and what shall be the sign of your coming and the end of the age?”

Consider now what scholarship has come to realize about the importance of the destruction of Jerusalem.

Stevenson shares this insight, “Reacting to the destruction of Jerusalem in 70 C. E., Rabbi Simeon states: Since the day that the Temple was destroyed there has been no day without its curse; and the dew has not fallen in blessing and the fruits have lost their savour.” (Sot. 9:12).” (Gregory Stevenson, Power and Place, (New York, Walter De Gruyter, 2001)128.

Eric M. Meyers shares this information:
“The destruction of the Temple necessarily had cataclysmic political and religious consequences. Because the Temple had functioned as a political and well as cultic center, its loss left a vacuum into which the rabbis would move.”

“The destruction of the Second Temple in 70 C.E. constitutes, in most analyses, a watershed event for the Jews of antiquity. The elimination of the center, source of spiritual nourishment and preeminent symbol of the nation’s identity, compelled Jews to reinvent themselves, to find other means of religious sustenance, and to adjust their lives to an indefinite period of displacement.” (Cultures of the Jews: A New History, p. 117)

“The loss of the Jerusalem Temple also meant that the Jewish religion had to transform itself from a Temple-based, sacrificial cult to a culture rooted in domestic and local practices.” (Eric Meyers in, (Cultures of the Jews: A New History, David Biale Editor, (New York, Schocken Books, 2002)163, 167.

Robert Briggs offers this, “Both the power of Israel’s God and the certainty of Israel’s election were called into question. The divine covenant appeared to be sundered. Atonement could not be won upon the broken altars. Israel’s millennial faith was shaken to its roots” (Jewish Temple Imagery, (New York, Peter Lang Publishing, 1999)1. Briggs cites Kirschener, Apocalyptic and Rabbinic Responses to the Destruction of A.D. 70, HTR, 78 (1987), 27-28. He also says, (p. 19, n. 64, Citing Safari, p. 906) (The Temple, Compendia Rerum Iudaicarum ad Novum Testamentum, Vol. 2, Fortress, (p. 906) – “With the destruction of Temple the image of the universe was rendered defective.”

Evangelical scholars have also begun to recognize the theological / redemptive / historical importance of the fall of Jerusalem. R. C. Sproul says: “No matter what view of eschatology we embrace, we must take seriously the redemptive-historical importance of Jerusalem’s destruction in A.D.70.” R. C. Sproul, The Last Days According to Jesus, (Grand Rapids, Baker Books, 2000)26.

Likewise, Amillennialist Burton Coffman wrote: “The fall of Jerusalem was the greatest single event of a thousand years, and religiously significant beyond anything else that ever occurred in human history.” (Burton Coffman, Commentary on 1, 2 Peter, (Abilene, Tx., Abilene Christian University Press, 1979)246.

To understand all of this even more, get a copy of my book, The Elements Shall Melt With Fervent Heat. It gives great detail in demonstrating the attitudes of the Jews, and helps us better understand Jesus and the Temple. 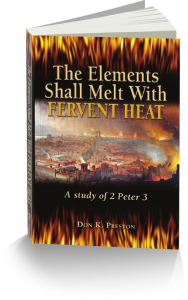 In light of this information, and we could multiply this kind of scholarly insight many times over, for someone to claim that the fall of Jerusalem was a localized event, of no lasting significance, is the epitome of lack of learning, or a willful rejection of the facts. Rejection of this information fails to comprehend the relationship between Jesus and the Temple, in his world.

With this information in mind then, in our next installment we will examine the ministry of Jesus and his claims about himself and the Temple. This is wonderful stuff, so stay tuned!