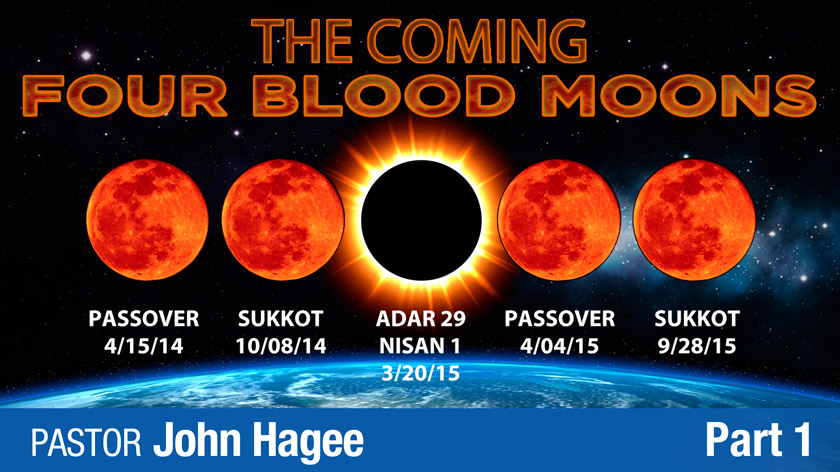 John Hagee is at it again. That’s right, he is, once again, predicting that the time of the end is upon us, and he “guarantees” that what he is saying is God’s truth. This time, Hagee has consulted with a Jewish Rabbi that, he assures us, really knows his stuff, and, he has consulted with some astronomers that assure him that what he is saying is God’s truth as well! Wow, can’t be wrong then, right? What is it that Hagee is saying that is guaranteed to be the truth?

Hagee has been teaching about the appearance of what is known as the Four Blood Moons. This is an astronomical phenomenon that only occurs ever so often. It is quite rare. But, what in the world is a Blood Moon? Well, that term is not an astronomic term, but, one essentially invented by some theologians. The astronomic term is Tetrad, and here is what it means:
“What is a tetrad? It’s four successive total lunar eclipses, with no partial lunar eclipses in between, each of which is separated from the other by six lunar months (six full moons).” (Source)

The Four Blood Moon Countdown– Will It Eclipse Hagee’s Ministry?

Hagee tells us that beginning April 15, 2014, and September of 2015, we will witness the Four Blood Moons, and, “Something big is coming!” He assures us that during this period of 15 months we will see the battle of Gog and Magog! In fact, he  appeals to Ezekiel 38 and predicts that Russia, Iran, Libya, Germany, Turkey and Ethiopia will all be totally annihilated, wiped out! He says Ezekiel makes this “very clear.”

Note: I have discussed Hagee’s views of the Four Blood Moons on two major talk shows the last few days. You can listen to one of those programs here.

For brevity, I want to simply point out that Hagee’s insistence that these Four Blood Moons will witness the fulfillment of Ezekiel 38-40– the Battle of God and Magog– flies in the face of the entire Dispensational eschatological schema! It makes one wonder why and how his followers could be so uncritical, so unthinking as to accept his pontifications without pausing to think: “Wait, that is not what you have been telling us all these years!”

So, how does Hagee’s new fascination with the Four Blood Moons falsify his own previously proclaimed eschatology? Let me explain.

The Dispensational outline of the Last Days events goes like this:
1.) The Rapture of the church.
2.) The appearance of the anti-christ who signs a peace treaty with Israel, allowing them to rebuild the Jerusalem temple– the Dome of the Rock notwithstanding!
3.) Three and a half years after the signing of the treaty and the building of the Temple, the Man of Sin breaks the treaty and begins the Great Tribulation against the Jews.
4.) At the height of the Great Tribulation, after 2/3rds of the Jews are killed, Israel cries out to the Lord, and Jesus appears in the sky, destroys the Man of Sin, in the Battle of Armageddon, and initiates the Millennium.
5.) The Jerusalem Temple is rebuilt with the re-institution of the animal sacrifices, the priesthood, etc..
6.) At, or near the end of the 1000 year reign of Christ, a rebellion breaks out, and the battle of God and Magog takes place. (Do you see a train coming? If not, you should!).

Okay, so, compare this schema– which is what Hagee has always preached– with what Hagee now says. He claims –“guarantees”– that within the next 15 months, we will see the battle of Gog and MaGog! This is just unbelievable. Follow me here.

Now, if the battle of Gog and MaGog takes place within the next 15 months, then of logical necessity, the following things MUST have already taken place:

1.) The Rapture of the church! Remember, according to Dispensational thought, the church is not on earth during the Great Tribulation, or, the battle of Gog and Magog. So, if the battle of Gog and Magog is only 15 months away, then the rapture of the church must have already taken place? This gives us the perfect right to ask: What in the world is Hagee and his congregation still doing here?

2.) The appearance of the anti-christ who signs a peace treaty with Israel, allowing them to rebuild the Jerusalem temple– the Dome of the Rock notwithstanding! Remember, Gog and MaGog are 1007 years after the peace treaty and 1000+ years after the building of the “Tribulation Temple.”

As an interesting side bar, on Facebook recently, a viewer of my videos posted comments blasting me as a heretic, false teacher, condemned to hell, ETC. ETC.. He said that if I understood the Bible at all, I would know that the end is near, so near in fact that the Man of Sin (which in his view, must be Barrack Obama), will sign a peace treaty with Israel by the end of spring, 2014. I challenged his claims by saying that if that treaty is signed then I would send him $1000.00. He immediately lowered the amount to $100.00. Notice that JKLY’s scheme demands the rapture of the church before June 21, 2014!!! (Remember the Dispensational outline given above).

So, at the moment, I am eagerly awaiting the arrival of June 21, 2014, the end of spring. I can sure use that $100.00!  At the time of this writing that is slightly over two months away, and there is no sign of such a treaty. Of course, it should be noted that the claimant, a poster by the name of JKLY began to immediately “hedge” as our negotiations proceeded. He even boasted that if he wanted to, he could remove all of his comments so that no one would know of my challenge. But, I cut and pasted those comments, so he can’t do that. Anyway, JKLY will be proven wrong, just like Hagee will be proven wrong.

You can watch my video and read the exchange here. I am betting that when (not “if”) nothing happens as he says it must, that I will never see a dime!

4.) The Second Coming of Christ to deliver the Jews and destroy the Man of Sin must have already taken place! (This is kinda troubling for JKLY’s view, is it not??)

Do you see how John Hagee has utterly contradicted his own past, stridently proclaimed Dispensational theology? One can only wonder what other Dispensationalists think of his “Four Blood Moons” theology! Yet, I have not heard one single Dispensationalists either say or write against what Hagee is so confidently saying. It makes one wonder if the evangelical world will ever hold such false prophets accountable for their repeated– and harmful– false prophecies.

Hagee’s Four Blood Moons predictions of the battle of Gog and MaGog are false to the core. Will he be held accountable by his congregation, or will he just quietly ignore the passing of time when nothing happens as he predicts. According to his calculations, by the way, the destruction of those “Gentile nations” of Ezekiel 38 must take place beginning no later than March 20, 2015! (But of course, Hagee claims he does not set dates!).

Stay tuned, because we will keep an eye on the sky– and the world– as the time comes and passes, without the fulfillment of Hagee’s (or JKLY’s) false predictions. We can only hope and pray that Hagee’s latest false prophecy concerning the Four Blood Moons will lead to the full eclipsing of his false ministry. For a lengthy article, with more details, see Joel McDurmon’s article.

Be sure to read my book Leaving the Rapture Behind, for a thorough refutation of the rapture doctrine. This harmful theology needs to be abandoned.