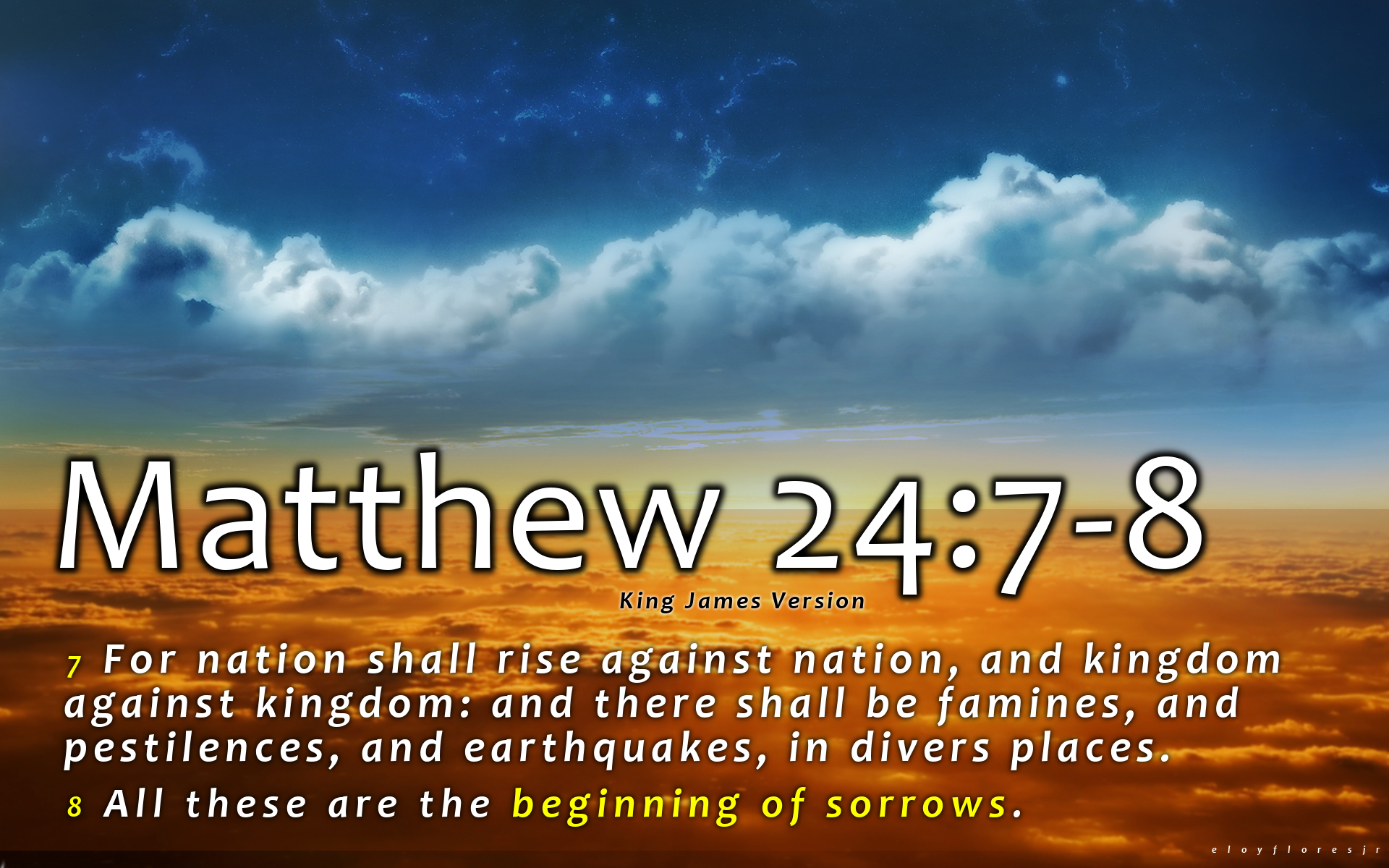 In Matthew 24:3 the disciples of Jesus asked for signs of the end of the age, and his coming. We want to investigate the importance of those signs in response to a visitors objections to some of our recent writings on Zechariah 14. Be sure to read my previous articles, beginning here.

As we have noted, this takes for granted, without proof, that the disciples asked about two separate events in v. 3. But, we have noted that it is essentially undeniable that in the mind of the disciples, the coming of the Lord and the end of the age were directly tied to the destruction of the Temple.

We ask again a question posed earlier: What age did that Temple represent? The disciples most assuredly thought the destruction of the Temple and Christ’s parousia at the end were connected. Unless our Responder can demonstrate that the Temple represented the Christian age, then it remains established that the age that was to end at the parousia was the age represented by the Temple, and that was the Mosaic Covenant age.

Our Responder seeks to deflect the force of this argument by claiming that the focus of the parables is life in the kingdom, and that this somehow negates the connection between Daniel and Matthew 13. No, the focus is on the end of the age. The focus is on the fulfillment of prophecy. It is on eschatology. This is particularly true of the parable of the Wheat and Tares.

Jesus said Daniel would be fulfilled at his coming at the end of the age. It is improper to negate the very issue that Jesus emphasizes– as fulfillment of prophecy– and claim that the real focus of his teaching, i.e. life in the kingdom, somehow mitigates what he said about the time of fulfillment.

I emphasize again that the text of Daniel is emphatic: “all of these things” which contextually demands the inclusion of the resurrection and the end of the age, were to be fulfilled, “when the power of the holy people has been completely shattered” (Daniel 12:7).

I would kindly suggest that attempts by our Responder friend to divorce v. 7 from the earlier verses are based solely on presuppositional theology. It dichotomizes the text in ways that the grammar and the context do not permit. The insertion of huge temporal gaps into the text of Daniel 12 simply has not textual merit.

Incidentally, I fail to see where our Responder has justified the idea that because eutheos in 1 John 3 could possibly allow for a very short “gap” between intent and fulfillment, that this somehow justifies the insertion of a 2000 year gap between eutheos in Matthew 24:29 and the parousia. A lapse of a very short time does not justify, suggest, or demand a gap of 2000 years!

And as I have noted repeatedly, the fact that a person can find an exception to a normal definition  of a word does not in any way negate the normal definition. And when the universal translation of eutheos in Matthew 24:29 is immediate, we should not allow preconceived ideas to insert incredible temporal gaps into a word that no where allows for such a definition.

But, now, we want to turn our attention back to the Matthew 24 and the Olivet Discourse and the claim that verses 29f must be delineated from the earlier discussion because of the reference to “that day” verses “those days, and because of the “after the Tribulation” reference.

I have noted that the  “that day” of v. 29f is the climax to “those days.” And Jesus emphatically says so in repeated fashion.

Notice the flow of the text. The disciples asked for signs of the parousia and the end of the age (v. 3). Jesus gave the signs in v. 14-22. For instance, the fulfillment of the World Mission was to be a sign of the end. When the Mission was completed “then comes the end” (v. 14). What end? Contextually, the only “end” they asked about was the end of the age at the parousia- which they tied to the destruction of the Temple.

In my book, Into All The World, Then Comes The End, I document that every word used by Jesus to predict or command the Mission into all the world, the earth, or all the nations, etc.. is used by Paul to say that the Mission had been fulfilled! See that book for a full discussion.

The disciples asked for signs of the end of the age and Christ’s coming.

Jesus gave the fulfillment of the World Mission as a sign that the end would be near.

The World Mission was fulfilled in the first century (Colossians 1:5f; 23).

Therefore, Christ’s coming and the end of that age was in the first century.

To put this another way:

The disciples asked for signs of his coming– the coming found in v. 29f.

Jesus gave the completion of the World Mission as a sign of the imminence of the coming in v. 29f.

Therefore, the coming of v. 29f– “sign-i-fied” by the fulfillment of the World Mission, was near in the first century. (Of course, this agrees perfectly with v. 34, but more on that later).

This is confirmed by the specific language of v.29-34. Our Objector has argued that Jesus’ referent to “that day” in v. 36 “explicitly” distinguished between “those days” and the parousia. This is nullified by several factors.

The disciples asked for signs of Christ’s end of the age parousia.

The completion of the World Mission and the Tribulation were signs of the imminent parousia and end of the age – Jesus.

But, the completion of the World Mission and the Tribulation were in the first century– prior to the fall of Jerusalem.

Therefore, the parousia and the end of the age– of Matthew 24:29f was near in the first century.

Matthew 24, the Signs of the End and James

Notice now James 5:7-9:
“Therefore be patient, brethren, until the coming of the Lord. See how the farmer waits for the precious fruit of the earth, waiting patiently for it until it receives the early and latter rain. You also be patient. Establish your hearts, for the coming of the Lord is at hand.  Do not grumble against one another, brethren, lest you be condemned. Behold, the Judge is standing at the door!”

James is writing to those being persecuted, just as Jesus predicted as part of the “birth pangs” in Matthew 24:8f; Mark 13:9f.

He urged them to be patient, “until the coming of the Lord.” He uses the same word that he and the other disciples used in Matthew 24:3 when they asked about the signs of the parousia!

He unequivocally affirmed: “The coming has drawn near” (v. 8, literal rendering). Again, the word parousia, as in Matthew 24.

He then says: “The judge is standing right at the door” which is a direct echo of Matthew 24:32-33 where Jesus said:  “When you see all these things (the signs of the end) then know that it (or “he”) is near, even at the door.”

So, James, who was on Olivet with Jesus, heard his master say to watch for the signs of the end, and “when you see” them you will know that the end of the age and the parousia is near. He wrote later in that very generation, in the midst of the persecution of the end times, and said, “the parousia has drawn near” and, “the judge is standing right at the door.”

Jesus said when you see the signs, know that the end of the age parousia is at the doors.

James said the parousia had drawn near, and the judge was right at the door.

Language could hardly be clearer. James was affirming that Christ’s parousia was truly near when he wrote!  I would suggest that our Objector’s claim that:  “no one ever knew the timing of the second advent, whatsoever”; and “but of that day’s (v. 29f) day and hour is completely unknown” flies in the face of James’ inspired statement. It pits James against Jesus.  James certainly thought he knew something definite about the nearness of the parousia! So, was James wrong?

In our next installment, we will examine the fundamental argument concerning:  “But of that day and hour knows no man.” We will discover that James was right! I believe you will find it helpful and enlightening, so stay tuned!