Last Friday, 4-12-19, I posted a Youtube video, the first in a series, reviewing and responding to Sam Frost’s book, The Parousia of the Son of Man. Sam Frost responded to that video with an article on his website. After reading Frost’s “response”  I must admit to be being more than a little disappointed, not to mention shocked at how trivial and misleading it is– not that I had reason to expect more.

The substance of Frost’s “response” can be found in this one revealing paragraph:

Preston then goes into creating a smokescreen by “quoting” from several works of scholars (Colin Brown, Deismann, Kittel’s Dictionary, Dunn). What I never tire of pointing out is that none of these scholars would come close to affirming Full Preterism as Preston defines it! Preston goes on to say that “presence” is used of God – who is without a body – by Josephus (Antiquities) – giving the impression that I do not source Josephus (I do, page 9). However, I only quote where that first century historian used the term in reference to actual people. Preston’s point – what he wants his devotees to “get” – is that I am being misleading. I’m not. I, too, have the sources (and have read them) that he quotes. Josephus does indeed use the term “parousia” for God’s “manifestation.” God is without a body. Therefore, so Preston’s presupposition wants you to think, Jesus’ parousia in 70 AD is invisible. Preston, however, fails to note that the use of parousia for God’s presence highlights my point.

Let’s see here, while I could say a lot more in response, I will keep this short, yet long enough to show – as we continue our practice of Responding to the Critics, the error and misrepresentations in Frost’s misleading “response.”

Frost says I create a smokescreen by quoting several scholars who note the non-bodily definition of parousia. Frost’s comment is fascinating and revealing, SINCE FROST CLAIMS THAT HE AGREES WITH WHAT THOSE SCHOLARS SAY ABOUT THE DEFINITION OF PAROUSIA! (All caps for emphasis only). He says he agrees that parousia can refer to a non-bodily presence! He says he even affirms it! Well, then, how was I creating a smokescreen by citing the scholars that Frost claims to agree with???

No, Frost is the one creating a smokescreen by insisting– by emphasizing – that parousia meant bodily presence, and only noting in a foot note, and in language that is not clear and unmistakable– that it can refer to a non-bodily presence. When Frost admits that parousia can and does often denote a non-literal, non-bodily presence of the Lord, then the only question becomes, is that how the Bible uses the word in reference to Jesus’ parousia? If it is, Frost’s paradigm is falsified.

Second, Frost says: “What I never tire of pointing out is that none of these scholars would come close to affirming Full Preterism as Preston defines it!”

I have responded to Frost’s “response” here many times. In fact, here is what I posted just this morning (4-18-19):

“Totally irrelevant and you know it. I never said they were full preterist. All you can do is dodge and deflect and not address the issue.

Oh, kinda funny that you conveniently omit- twist and distort what I said.” Then, I added this: “The scholars and sources I cited give the lexical and historical usage of parousia– and, let’s not forget that you now claim to agree with them! But, those scholars give their “interpretation” of eschatology, failing to apply, or misapplying what they themselves offered in regard to definitions. So, Mr. Sam Frost there is a substantive difference between linguistic definitions and theological interpretation.”

So, Frost’s gladness to point out that the scholars that I cited– with which he agrees (he claims) are not preterists is moot. He agrees (he says) with their non-bodily definition of parousia. Frost’s admission that the scholars and sources that I cited are true and accurate establishes my case. It matters not that they are not preterists. His admission establishes the truth of my video.

Third, notice Frost’s admission on parousia in Josephus: “Preston goes on to say that “presence” is used of God – who is without a body – by Josephus (Antiquities) – giving the impression that I do not source Josephus (I do, page 9). However, I only quote where that first century historian used the term in reference to actual people. Josephus does indeed use the term “parousia” for God’s “manifestation. God is without a body.”

Response: More amazement. Yes, Frost does cite Josephus on parousia, but, he does not cite him in support of the non-bodily coming of the Lord! He did not give any of the citations from Josephus where the historian spoke of “the power and parousia” of the Lord– the very term used by Peter in 1 Peter 1:16f to speak of the then still coming parousia of Christ! Why did Frost ignore these references? Because his goal and aim was to convince the reader that parousia is a bodily presence. His admission that Josephus does indeed use the term “parousia” for God’s “manifestation. God is without a body.” Is incredibly important, but of course, Frost did not want to dwell in that place, because that is harmful to the point of his claim. His total lack of objectivity, to point out the “alternate” definitions in any substantive manner, demonstrates this.

Fourth, Frost makes an absolutely amazing claim: “Preston, however, fails to note that the use of parousia for God’s presence highlights my point.”

Response: This is, to put it bluntly, nonsense. The fact is that this claim is nothing but a thick smokescreen. The reality is that “ the use of parousia for God’s presence highlights my point”– my point –not Frost’s! How does establishing the fact that the manifestation of God in the Tanakh was never bodily, and the fact that Jesus said he was going to come “in the glory of the Father” (which Frost simply scoffs at) “highlight” Frost’s point? It refutes it!

Fifth, Finally, Frost thinks he has a point when he argues that men were to flee from the presence (parousia) of the Lord. After all, God is everywhere, right? So, how could / would men flee from the omni- presence of the Lord?? Here is what he says:

Aside from Preston’s admitting that parousia is used of God’s specific manifestation of His Omnipresence – did anyone in the examples of Josephus, flee? Did God manifest himself to Moses and the 70 elders? When God showed up to Elijah, did Elijah flee? If Jesus was going to appear “in the glory of his Father” (Preston’s strange twist on what that meant), why would Jesus tell them to flee where he was to appear? In fact, Paul spoke of Jesus’ parousia in terms of believers being right there when he descends! Was Paul telling the Thessalonians to flee? If Jesus appeared in Jerusalem invisibly, locally, in terms of a manifestation (phanoo – Greek) in 70 AD, then when did he descend and appear to the Thessalonians located hundreds of miles in Asia Minor?

Response: This is amazing, simply amazing! Mr. Frost, I did not “admit” to God’s specific manifestations of His Omni-Presence” I affirmed it!! (Note that Frost twice says that I “admit” to something, implying that I was surrendering to some point of his, when in fact, the points that he says I was admitting were points that I affirm and made in my video!) Why was Mr. Frost trying to imply that I surrendered some point, WHEN I AM THE ONE THAT MADE THE POINTS?

Next, Frost is seemingly willfully ignorant of the idea of FLEEING FROM THE PRESENCE OF THE LORD, as found in the Tanakh, to speak of the last days day of the Lord. Take a look:

When would this Day of the Lord take place? In the last days (2:2ff). Frost says we are in the last days, therefore, logically, these verses MUST refer to the so called “end of time. But, that kinda begs the question as to how men could run to the hills and hide in the caves, if the Day of the Lord is over, in a moment, in the twinkling of an eye, right?

Significantly, Jesus quoted directly from these verses in Luke 28:28-31, to speak of the impending destruction of Jerusalem. Thus, men would flee from the presence of the Lord in the last days Day of the Lord against Jerusalem in AD 70. Likewise, Paul quoted from the same verses that Jesus did, to promise the Thessalonians that they were about to receive relief from their then on-going persecution at the hands of the Jews “when the Lord Jesus is revealed from heaven” (2 Thessalonians 1:5f). In addition, John, in Revelation also quoted from the identical verses that Jesus applied to AD 70, in Revelation 6:12f in the prediction of the coming Great Day of God’s wrath in vindication of the martyrs–which of course, Jesus undeniably posited at the impending judgment of Jerusalem (Matthew 23:29-37).

Finally, Frost claims that I deny that he ever admitted that parousia can refer to a non-bodily coming / manifestation. That is blatantly false. At the 15:35+ mark of my video, I openly state that he admitted, albeit somewhat subtly, to that usage. So, for Mr. Frost to say that I claimed that he never admits to that usage is a falsehood.

While more could be said, (Frost’s brief article is literally chock full of error) this brief article is more than sufficient to expose the utter fallacies, the misdirection, the obfuscation and the overt misrepresentations found in Sam Frost’s “response” to my video #1 in Response and Refutation of Sam Frost’s book, The Parousia of the Son of Man.

For an in-depth study of the nature of Christ’s parousia, get a copy of my book, Like Father Like Son, On Clouds of Glory. This book has been called ground breaking, “definitive” and has been used in college classes. 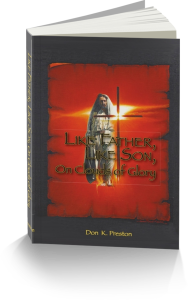