Be sure to read the previouis installments in this series  Part 1    Part 2.

Now to consider the book of Revelation and Paul’s promise of the salvation of “all Israel.” I must be ever so brief. I will give here only some bullet points for your consideration.

Jesus said his parousia for the salvation of the elect would be “immediately (Greek eutheos after” the Tribulation (Matthew 24:29-31).

(Note: I am currently writing an article on “The Resurrection in the Olivet Discourse.” This article will prove, very powerfully, that the Olivet Discourse, in the very “section” that is widely admitted to refer to the events leading up to and climaxing in the Lord’s coming in AD 70- foretold the resurrection!
Incredibly, while both Amillennialists and Postmillennialists admit that Matthew 24:4-34 refers to Jesus’ coming at the end of the Old Covenant Age in AD 70, the completely fail to see that these very verses contain a powerful prediction of the resurrection! This is tremendously important, so be watching for that series).

Notice now the connection between Romans 11 and Paul’s prediction of the salvation of the righteous remnant and the book of Revelation.

But, the 144,000 were the first fruit of those redeemed to God from men (Revelation 14:2f, i.e. they were the first generation of Jewish Christians!). See my book, Blast From the Past: The Truth About Armageddon, for definitive proof that the Great Tribulation / Armageddon was in the first century.

Therefore, the Great Tribulation– and thus the parousia of Christ for the salvation of the elect – occurred in the first century generation.

Now, since Romans 11:25-27 is about the salvation of “all Israel” i.e. the completed remnant of Old Covenant Israel, and since the book of Revelation posits that completed salvation at the very soon coming of the Lord, this means that the fulfillment of Romans 11:26-27 was near when John wrote the Apocalypse.

Similarly, we have seen that Paul said very clearly that the process of bringing Israel’s salvation history to its climax, through the salvation of the righteous remnant, was not to be a long drawn out affair. The Lord would make a short work on the earth (Romans 9:28). The book of Revelation agrees with this.

We have seen in the last article that no matter what your concept of the Messianic Kingdom, the remnant was receiving that kingdom in the first century.

No matter what your concept of the salvation of Israel might be, Paul said it would arrive in fulfillment of the prophecies of the avenging of the martyrs– thus in AD 70 according to Jesus.

No matter what your concept of the Tribulation or the parousia might be, John, in the book of Revelation, placed those events in the first century.

Thus, in our examination of the Objection that Romans 11:26-27 must refer to a future coming of the Lord and the conversion of national Israel, we have demonstrated, exegetically, that “all Israel” was saved at the end of the age coming of the Lord in AD 70. For more on this, and how John the Baptizer played such a pivotal, foundational role in that salvation, see my book, Elijah Has Come: A Solution to Romans 11:25-27. 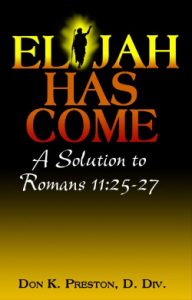