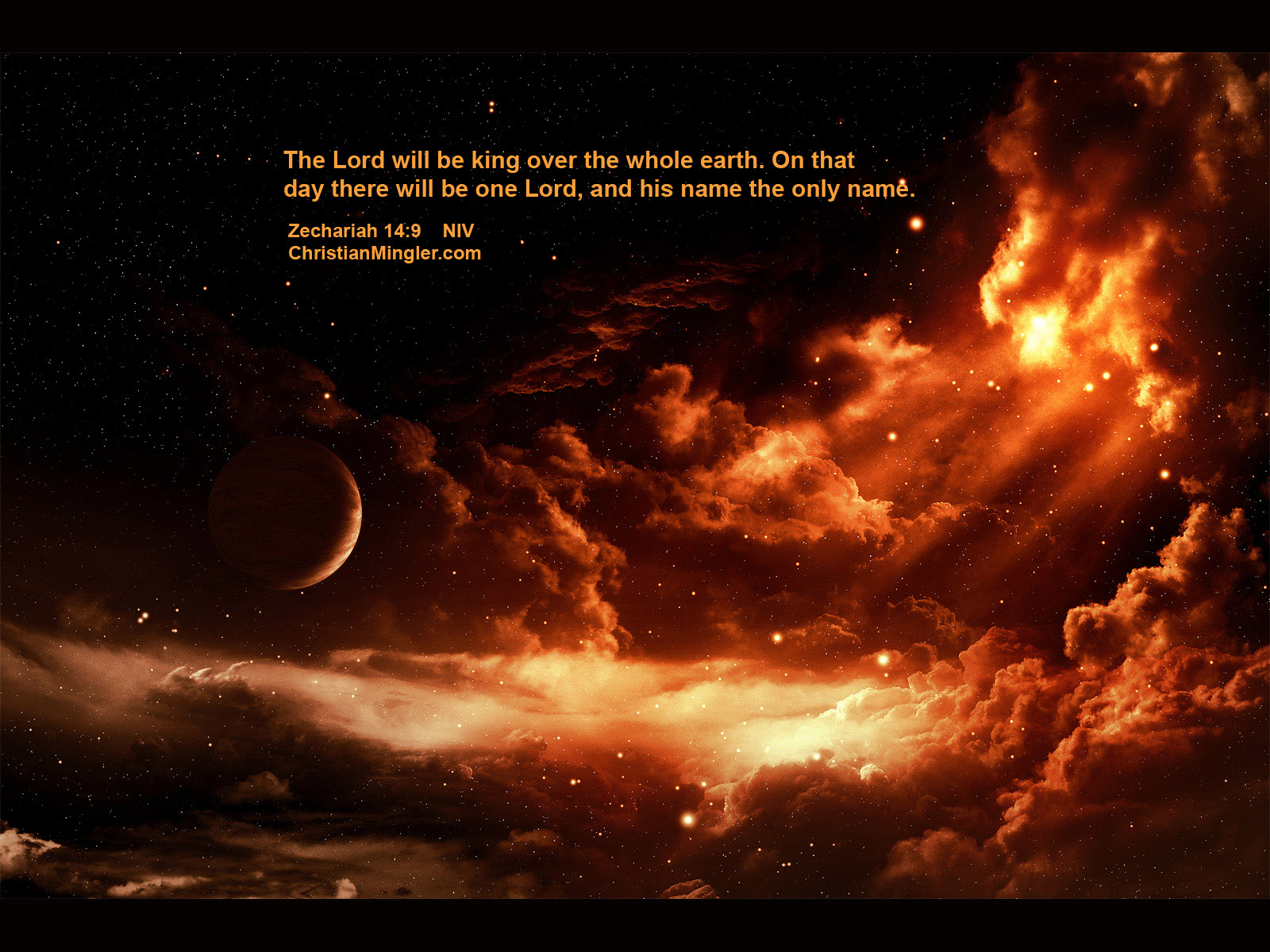 #3– Zechariah and Revelation” href=”http://donkpreston.com/the-eschatology-of-zechariah-14-3-zechariah-and-revelation/” target=”_blank”>In our last article on the eschatology of Zechariah 14 we demonstrated the direct parallels between Zechariah and the book of Revelation. John, in the Apocalypse, is undeniably saying that the prophecies of Zechariah are the source of his eschatological expectation.

The chronological framework for the fulfillment of the respective prophecies needs to be emphasized. Not one time does Zechariah 14 say the vision was “about to begin to be fulfilled” or was “at hand” or must “shortly come to pass.” He was not told “there shall be no more delay”; he was not told that the coming of the Lord against Jerusalem was to be in his generation.  See my book, Who Is This Babylon? for a fuller discussion of the relationship between Zechariah 14 and Revelation.

Zechariah 14 in Revelation– The Time Is At Hand!

On the other hand, John was told repeatedly that fulfillment of his vision was imminent. It was “at hand”; it “must shortly come to pass”; there would be no more. The time for the judgment of the city Babylon/Jerusalem was at hand. How is it possible to ignore the contrast between Zechariah’s day and John’s?

Modern interpreters agree that John was repeating the prophecies of Zechariah 14, yet claim they have not been fulfilled. To what purpose then did John receive his vision? Zechariah wrote 500 years before John and was told the fulfillment was not imminent. John was told the events were imminent. Have they not yet occurred after almost two millennia? Was John to simply repeat Zechariah’s prophecies and tell his audience that the vision would still not be fulfilled for 2,000 years?

It has been four times longer from John to the present than from Zechariah 14 to John. Zechariah did not say fulfillment of his predictions was imminent; John was told they were to be fulfilled shortly.  Note the comparison in Daniel 12, where Daniel was told about the time of the resurrection and the end of the age. He was specifically told that fulfillment was far off, and therefore, he ws to seal the book. In stark contrast, John, reiterating the prophecies of Daniel and Zechariah 14, was told that fulfillment was so near: “Do not seal the vision of this book, for the time is at hand!” There is something intrinsically wrong with any view that extends the fulfillment of Zechariah 14 / Revelation into our future.

This contrast in temporal context between the Old Covenant prophets and the New, is extremely significant for proper interpretation of scripture. There are other New Covenant passages that present this contrast.

Zechariah 14– The Then Versus Now!

In Romans 16:25-26 Paul said the mystery of God that had been hidden was now revealed in Christ. Paul’s contrast between “then” and “now” is important. His “then” was the time of the Old Covenant prophets. His “now” is his generation, the time of the revelation, maturation, and perfection of God’s scheme of redemption (cf. Romans 3:24f).

Ephesians 3 also contrasts former ages and the apostle’s generation. Paul says that in other ages the mystery of God was not revealed to the prophets “as it is now revealed to the apostles and prophets” (Ephesians 3:6f). The time of revelation has to do with the miraculous period, the time of apostles and prophets, not to all subsequent time. This shows that what the Old Testament writers anticipated, what they knew was not for their time, was being fulfilled in the first century generation. That fulfillment was not a protracted and extended thing. God promised to bring his work to a swift consummation (Romans 9:28): “a short work will I perform on the earth.”

Three other texts draw a sharp contrast between the foregoing time of prediction and the first century context of fulfillment. In Acts 3:19f Peter speaks of “all the prophets from Samuel forward” who foretold “these days.” Peter very plainly was not saying the time had arrived for the Old Testament prophecies to be repeated and another period of extended waiting to occur! He was saying they were in the last days (Acts 2:15f). The prophets had foretold events for the last days, therefore they were living in the days of fulfillment!

Hebrews 11:13-16 says Abraham anticipated a New Creation, a  New Heavens and Earth. Abraham and his descendants saw those things far off. For the writer of Hebrews, that New Creation was even then being delivered as the Old Creation was being removed (Hebrews 12:25-28).

Jesus commented on Abraham’s hope: “Abraham longed to see my day, he saw it and was glad” John 8:56. Abraham saw Jesus’ generation “far off”; that was 1900 years. By the way, isn’t it even a little bit significant that God called 1900 years “far off” while commentators tell us time statements mean nothing in the Bible? If time means nothing to God why didn’t God tell Abraham the New Creation was “at hand”?

Zechariah 14 and the Salvation About to Be Revealed

Finally, in 1 Peter 1:5-12 the fisherman said the Old Testament prophets foretold the “salvation of the soul” that would be revealed at the parousia. He said the prophets were told the things they were predicting were not for themselves. That is, they were not to occur in their time. It cannot mean the salvation was not for them, otherwise this would mean the salvation of Jesus would not be for the prophets!

That salvation, to be fully revealed at the parousia, was not for the prophet’s time, yet Peter insists it was being preached “unto us” by means of those inspired by the Spirit. That is his generation! That salvation was “ready to be revealed” vs. 5. “The time for the judgment” had come, (v. 17) because “the end of all things has drawn near,” (v. 7).

See my argument in my formal debate with Joel McDurmon, on Peter’s use of the anaphoric article in 1 Peter 4:17– which alludes directly back to v. 5. The anaphoric article here proves that the resurrection– the time of Zechariah 14!– had drawn very near when Peter wrote.

Zechariah 14 predicted the salvation of which Peter wrote. He foretold the opening of the fountain for sin (v.8) the establishment of Jehovah’s sovereignty (v. 9); the exaltation of Zion (v. 10); and the calling of the Gentiles (v.16f). Peter says Zechariah and the other prophets knew they foretold things not for their day. But Peter says that salvation was “ready to be revealed.”

Jesus was not just the turning point of history between two extended times of waiting and delay. What the prophets had longed to see and that had been a long time coming was now on the verge of fulfillment: “The time is fulfilled, the kingdom of heaven has drawn near” (Mark 1:15). The contrast is between the time of prophecy, of promise, of delay, and the time of fulfillment.

Consider what Jesus said in Mark 1:15: “The time is fulfilled, the kingdom of heaven has drawn nigh.” Commenting on the word kairos used there Gentry says: “Christ asserts ‘the time is fulfilled.’ What is ‘the time’ to which he refers? The Greek term here is kairos, which indicates ‘the fateful and decisive point’ that is ordained by God.’ This ‘time’ surely refers to the prophetically anticipated time, the time of the coming of David’s greater Son to establish the kingdom, for he immediately adds: ‘the kingdom of God is at hand.’” (Kenneth Gentry, He Shall Have Dominion, Draper, VA., Apologetics Group, 2009)218.

F. F. Bruce said this: “These words express, among other things, the assurance that an ardently desired new order, long since foretold and awaited. was now on the point of realization.” (The Time is Fulfilled, (Exeter, Paternoster Press, 1978)15.

Even Dispensationalist Thomas Ice, commenting on the prophetic expectation found in the NT said: “A survey of the New Testament enables one to realize that there is an expectancy regarding the return of Christ and the consummation of His plan not found in the Old Testament.” (Kenneth L. Gentry and Thomas Ice, The Great Tribulation: Past Or Future?, (Grand Rapids, MI: Kregel Publications, 1999)117.

That time of fulfillment was the first century generation!

The application therefore, between Zechariah 14 and Revelation is evident. Whereas Zechariah knew that the things he foretold were not for his day, John, in writing the Apocalypse is insistent that the things Zechariah had prophesied were now “at hand”; they “must shortly come to pass”; there would be “no more delay.” Any interpretation of Revelation that extends its fulfillment beyond that imminent context is doing grave violence and injustice to the contrast between the time of delay and the promise of no more delay.

The importance of the temporal contrast between Zechariah 14 and Revelation cannot be ignored by serious students. Following articles will examine the parallels more carefully. It will also be seen that Zechariah’s prophecy and its framework of the end of Israel has a direct bearing on many New Testament passages normally assigned to the end of the Christian Age.