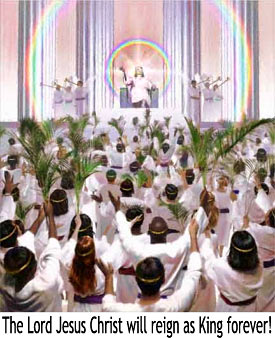 We have been examining the prophecy of the coming of the Lord with His saints, as found in Zechariah 14. We have seen how strongly Zechariah has influenced the NT writers in regard to eschatology. And what is so important is that in every NT text we have examined, the writers give an emphatic time statement about when the Lord was coming with His saints, or, the framework of the judgment of Old Covenant Israel is clearly the context. This is critically important.

The Apocalypse certainly agrees with the rest of the New Testament in predicting the coming of the Lord with his holy ones. His coming would be in judgment against the city guilty of persecuting the prophets, saints and apostles (Revelation 18:4, 20-24). This agrees perfectly with Zechariah 14 (and from chapter 12 onward) that the Lord’s coming with the saints would be against the city that had slain Messiah (12:10).

This city was first century Jerusalem. It grows increasingly strange to me, how Bible students can still take the late date of Revelation, in light of these connections, and a multitude of others. Carrington says the evidence for this identification is so strong that: “Had we not been indoctrinated with the theory that it (Revelation, DKP) deals with Rome, it would never have occurred to us.” Be sure to read my book Who Is This Babylon? for an in-depth study of not only the dating but the application and interpretation of Revelation.

Now since the Messiah’s coming with his saints in the Apocalypse is in judgment against Jerusalem, and since the prophecy of Zechariah 14 was a prediction of the Lord’s coming with his saints in judgment against Jerusalem we have some pretty strong evidence not only for the pre-AD 70 dating of Revelation but the metaphoric nature of the parousia in Revelation!

It is abundantly clear that Zechariah and Revelation predicted the same time and same events. Since Zechariah 14 is so undeniably speaking of the time of Christ’s end of the age coming against Jerusalem then we must place the parousia of Revelation in the same context.

Zechariah 14 and A Question of Hermeneutic

Further, since Zechariah 14, in predicting the Lord’s coming with his saints against Jerusalem was patently using metaphoric language to describe that parousia, upon what basis does the interpreter of the New Testament change the language to literal? Where is the example of a New Testament writer quoting Old Testament figurative language but applying it literally? To this writer’s knowledge, there is no such example. If there is no Biblical example of such a hermeneutical approach where is the justification for it today?

This is, in fact, a tremendously important hermeneutical issue, in light of the hermeneutic that we are hearing and reading the Dominionists of the day. We are being told that the OT prophecies of the resurrection, e.g. Ezekiel 37, Daniel 12, etc., were clearly references to a “spiritual resurrection” but, that the spiritual resurrection now points to a literal, physical, raising of corpses out of the ground!

Zechariah 14 and Our Conclusion Our study of Zechariah 14 and the theme of the coming of the Lord with His saints has shown how influential Zechariah’s prophecy is on the New Testament writers. His thoughts, which were no different from the other prophets, permeate the New Covenant corpus.

Zechariah was plainly, and by candid admission of many scholars, dealing with the end of Israel’s Old Covenant Age. One must ponder why students of the New Testament are either ignorant of Zechariah’s influence or unwilling to accept the framework within which he placed his prophecies.

We will have more from Zechariah in upcoming articles, so stay tuned.