The prophecy of Zechariah 14 about the coming of the Lord with His saints, has, as scholars have long recognized, had a heavy influence on the eschatology of the NT, particularly the Olivet Discourse and Thessalonians. The influence of Zechariah 14 on Jesus’ prediction of the end of the age parousia in Matthew 24-25 is very clear, and has tremendous implications for a proper understanding of NT eschatology.

France says this passage is a “clear allusion to Zechariah 14:5.” (R. T. France, Jesus and the Old Testament, Grand Rapids, Baker, 1982)158.  Joel 2-3 also clearly serves as another of the sources for this text. Zechariah 14 and Joel certainly predicted the same time frame and events. Joel also predicted the coming of the Lord with his “mighty ones” in the last days (3:11). Matthew 25 is a conflation of the two texts. This being true, and there can be no serious doubt that it is, we are once again forced to place Zechariah 14 within the framework of the fall of Jerusalem. A comparison with two critical texts should remove all doubt. Notice the comparison charts.

* Since there is no chapter division in chapter 24 the time statement of Matthew 24:34 applies to Matthew 25:31. The theory of a divided Olivet Discourse is untenable. See my We Shall Meet Him In The Air, The Wedding of the King of kings, (Ardmore, Ok. JaDon Management, 2009) for an in-depth demonstration.

What is interesting about these comparisons that so clearly show the direct connection between these texts is to see how modern commentators- especially the Dominionist / Postmillennialists are “all over the map” in their interpretation.

Gentry, discussing Matthew 16:21-28 says: “And at v. 21 he warns his disciples Israel’s religious leaders– even her ‘chief priests’ (which included past and present high priests of God’s temple)– will kill him. Not only so, but we must note something quite remarkable here. In Matthew Jesus never mentions Jerusalem until he states that he is going there to be killed by its leaders. This becomes even more significant in that Matthew himself never mentions Jesus’ several visits to Jerusalem until he shows him entering it to die ((21:1f). Yet we know from John’s Gospel that the Lord did visit there often, even very early in his ministry (John 2:23; 5:1; 7:25; 10:22-23; 12:12-14). But Matthew (and Mark) bypasses that information as he builds his case against Jerusalem and Israel. As a consequence of the religious leaders killing him, he teaches in 16:28 that some of his followers will live to see him ‘coming in his kingdom’ (Mark reads that they will ‘see the kingdom of God after it has come with power,’ Mark 9:1). In that only ‘some of those standing here’ will live to see it, this must point to AD 70 destruction of the temple which occurs forty years later.” (Kenneth Gentry, The Olivet Discourse Made Easy, (Draper, VA. Apologetics Group, 2010)14.

However, when it comes to Matthew 25:31f, which, as the chart demonstrates contains the identical language, the identical motifs  as Matthew 16, Gentry says it, along with the “delay” parables in the foregoing discussion, must refer to the end of time:

“His return not been imminent since the ascension”; “The New Testament teaches, however, that the Lord’s glorious, bodily return will be in the distant and unknowable future. It has not been imminent and will not be datable. Theologically ‘distinctive to (Postmillennial) is the denial of the imminent physical return’ of Christ.” – “Jesus clearly taught: ‘While the bridegroom was delayed, they all slumbered and slept (Matthew 25:5). For the kingdom of heaven is like a man traveling to a far country, who called his own servants and delivered his goods to them… After a long time, the Lord of those servants came and settled accounts with them (Matthew 25:14, 19). There is no expectation here of an any-moment return– there is quite the opposite.”  (He Shall Have Dominion, (1992) 331-332). (Gentry’s contention that there are, so far, two millennia of delay in the language of Matthew 25:1f is specious and is a classic example of eisegesis. There is no contextual justification for this claim.

The problem for Gentry is that the coming of the Lord with his saints in Matthew 25 is, as just demonstrated above, an undeniable reference back to Zechariah 14. And how does Gentry apply the Day of the Lord in Zechariah 14? To the Lord’s coming in AD 70: “The siege of Jerusalem in Zechariah 14:1-2 points to the AD 70 judgment upon Jerusalem.” (Dominion, 2009, 483).

Then we have Mathison who claims that one of the major failures in the history of the church is the failure to see that the NT references to the “coming of the Son of Man” are distinctive and refer exclusively to the AD 70 parousia. (Keith Mathison, Age to Age, The Unfolding of Biblical Eschatology, Phillipsburg, NJ, 2009). Then, of course, Mathison contradicts himself by claiming: “Before verse 34, there is a short time frame of forty years (v. 34). After verse 34, the time frame is long (24:48; 25:5, 19).” (Dispensationalism, Rightly Dividing The House of God?,  (Phillipsburg, NJ, P & R Publishing, 1995)138, 144).  So, on the one hand, all references to the coming of the Son of Man (which of course would include Matthew 25:31f!) must refer to AD 70. But then, all references to the coming of the Lord after Matthew 24:34 refer to events a long time off– i.e. the end of time. Confused? It is confusing to say the least.

It is quite surprising to read Gentry labor to find a dividing point in subject matter in the Olivet Discourse, and yet, then claim that even if Matthew 24 is united, and does not in fact speak of two events, the fall of Jerusalem and the “end of time” parousia, that it would not materially affect his eschatological paradigm.  See his comments here.

To speak bluntly, this is nonsense. Jesus’ Olivet Discourse is the paradigm from which the rest of the NT eschatology is drawn, as scholars have long recognized.  Paul most assuredly draws from the Olivet Discourse in 1 Thessalonians 4– and Gentry admits this: “Most commentators agree that the Olivet Discourse ‘is undoubtedly a source of the Thessalonian Epistles.’” (Citing D.A. Carson, with approval). (Kenneth Gentry: Thine is the Kingdom, (Vallecito, CA, Calcedon, 2003)162).

To suggest that the Olivet Discourse is the source of Thessalonians, and then to claim that it is not important whether the Discourse is or is not divided is surely disingenuous. Few scholars would agree with Gentry’s claims.

Notice what Mathison says about the importance of the Olivet Discourse and eschatological understanding: “The interpretation of Jesus’ Olivet Discourse will have profound effects upon any study of eschatology.” (Keith Mathison, Postmillennialism: An Eschatology of Hope, (Philippsburg, NJ, P&R Publishing, 1999)111).

You cannot “surrender” Matthew 24:36-25:46 to an AD 70 application without surrendering all futurist doctrines of judgment and resurrection, it is that simple.  Interestingly enough, when writing to refute dispensationalism, Gentry says the Olivet Discourse is vitally important to the study of eschatology. So, on the one hand, it does not matter if the Discourse speaks only of AD 70, but on the other hand, it is fundamental to a proper understanding of eschatology! (See my fuller discussion of Gentry’s inconsistency in my We Shall Meet Him In The Air, The Wedding of the King of kings, (Ardmore, Ok. JaDon Management, 2009).

It should be apparent that Matthew 25 says not one thing different from chapter 16 and chapter 24. They all are drawing from Zechariah 14 and his prophecy of the coming of the Lord with his saints.

Yet traditionally, as just seen, in both the amillennial school (of my upbringing) and the Postmillennial world, Matthew 16:27-28 is very often divided between verses 27-28.  Matthew 24:29-31 is applied to the fall of Jerusalem in AD 70, while Matthew 24:35– chapter 25 is applied to the “end of time.” This mixed bag of interpretations when the identical language, the identical motifs and themes are involved is at the least cause for caution. And of course, we would take note that the Dominionists are fond of taking note of parallels between texts in order to establish the first century coming of the Lord and yet, totally ignoring the parallels between texts that they apply to AD 70 and the texts that they apply to the supposed “end of time”!

McDurmon says that due to the similarity of language between Matthew 24 and 1 Thessalonians 5:1f, we should apply Thessalonians to AD 70. (1 Thessalonians 5:2, 4: “This day of the Lord is past.” (Also, p. 328 – Paul and Peter, in 2 Peter 3, are speaking of the same day since they both use the same metaphor.” (McDurmon, Jesus V- Jerusalem, Powder Springs, GA, American Vision, 2011)29). That book, which is very good in many ways, is available from me here. Like so many other Postmillennial / Dominionist books, after reading it, you will wonder how anyone could write such things and not be a full preterist! 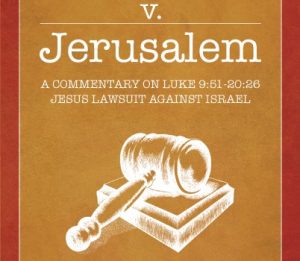