Before proceeding with my examination of Isaiah 65, let me address just a thing or two from Frost’s attempt to answer my arguments on Isaiah 24.

Frost claims that I did not mention Isaiah 24:13; “ Preston leaves out 24.13.” Well, Frost is either having difficulty with reading comprehension, he simply overlooked what I said, or he is purposely misrepresenting my article.

Here is what I said:
“This is confirmed in verses 10-13 where we find that the judgment would be focused on “the city” in the midst of “the land” and against “the people.” (So, Mr. Frost simply did not tell the truth when he claimed that I conveniently omitted any reference to Isaiah 24:13. It is right there in my article). (My emphasis). Why did Frost claim that I left out Isaiah 24:13, when I explicitly mentioned it?

I then added:
“The city of confusion is broken down; Every house is shut up, so that none may go in. There is a cry for wine in the streets, All joy is darkened, The mirth of the land is gone. In the city desolation is left, And the gate is stricken with destruction. When it shall be thus in the midst of the land among the people, It shall be like the shaking of an olive tree, Like the gleaning of grapes when the vintage is done.” In Isaiah 29 this “city of confusion” is identified as Ariel, i.e. Jerusalem! (Did Frost address this? Not a keystroke).

Ask yourself the question: In a Hebraic book, addressed to Israel, and in which the terminology of “the city,” “the land, and “the people” is used, if there is not a really strong set of contextual pointers otherwise, who would the readers think that the Lord was talking about? (Did Frost mention this? No).

For Israel, there was but one “the land.” They were “the people.” And, “the city” was none other than Jerusalem.” (Frost’s response? Silence).

Now, if you want to talk about evasiveness, all you have to do is read Frost’s “response” to this. What is interesting is that Frost renders the Hebrew eretz as earth, and not “land” in order to make his point. He is insisting that Isaiah is talking about planet earth, and not about the land of Israel, “the people” and “the city” that was in the midst of “the land.” This is more than revealing for it shows that Frost is willing to ignore the fact that this word is, in the huge majority of cases, used to speak of the land of Israel. It is seldom used to speak of the planet. (And yes, I could quote the scholars on this, but, I am trying to keep this short).

Whereas Mr. Frost was simply not telling the truth to say that I ignored verse 13, he undeniably did ignore these comments. Not a word, not a syllable, not a key stroke. This is disingenuous.

Mr. Frost makes a huge deal out of the city being in the midst of the earth and the nations round about. Well, Isaiah is directly parallel in thought to Ezekiel 5:5-9 (although Ezekiel was later than Isaiah):

We have here perfect correspondence. Whereas Isaiah is against Israel (as well as “the city), and Ezekiel was against Judah, the correspondence is perfect. It is all about “Israel’s” violation of the Law. Oh, did everyone notice that Frost ignored the correlation between Isaiah 24:5 and Hosea 6:7– that establishes that it was Israel’s violation of the Law of Moses that was under consideration? Frost did not touch a keyboard key in response.

And speaking of ignoring my arguments, Mr. Frost likewise ignored my exegetical development of Psalms 102, and the undeniable fact that the destruction of “heaven and earth” would be when the Lord created a new people. While Frost once again falsely claims that I ignored his response, the fact is that he has yet to type a word in response. The question is, what people is destroyed at the literal passing of heaven and earth proposed by Mr. Frost, and what is the new people that is created– all in fulfillment of God’s Old Covenant promises made to Old Covenant Israel? He has not breathed on this- and most probably won’t.

For brevity, I will only address one other “point” if one can actually call it that, made by Mr. Frost. He sarcastically alluded to my discussion of “the everlasting covenant” claiming of course, that if Isaiah 24 is about the Mosaic Covenant, and that covenant came to an end, that it was not very everlasting. Once again, Frost is revealing his willingness to ignore linguistic facts.

Frost well knows that the Hebrew word “olam” that is translated as “everlasting,” “forever,” etc., is very, very often used of things that were not “endless” in the Western way of thinking of “everlasting.” See my book, Israel 1948: Countdown to No Where, for a very good study of this word. 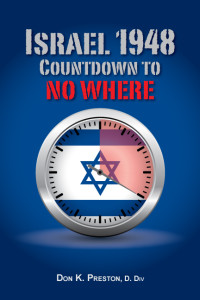 The Levitical priesthood was eternal. The sacrifices were forever. The Sabbath itself was everlasting. Now, does Frost believe that those tenets remain valid? Not for one moment. So, he knows that “everlasting” can and did in Hebrew, mean until such time as appointed by God. Thus, God could – and did – call the Mosaic Covenant the “everlasting covenant” even though it was destined to end. It is truly sad to see Frost try to pull this sleight of hand with the Hebrew. He knows full well that this is a specious argument.

BTW, I will address in another post what Frost clearly considers his key point, the distinction between the Law of Moses, i.e. “The covenant”, and the rest of the Tanakh. Frost seems to think that his dichotomization between the Mosaic Covenant and “the law” is fatal to my view. In fact, his argument is nothing but a straw man, designed to cloud the issue, but it has not merit, no power in this discussion.

Now to continue our exegesis of Isaiah 65 since Frost claims that it is predictive of the “end of time.” Be sure to read my first installment in this examination. But, let me refresh your memory about what I noted.

1. Isaiah predicted Israel’s rebellion and the calling of the Gentiles (v. 1-3). Paul emphatically applied that to his day and to his ministry. This means, unless Frost now accepts the Dispensational Gap Doctrine, that Isaiah 65 must be placed within that temporal framework. After all, in Isaiah, it is the rebellion of Israel that leads directly to the New Creation, as we will see momentarily. This is a huge issue for Frost.

2. Isaiah spoke of the time when Israel would fill the measure of her sin (v. 7), and God would act in judgment. I noted that Jesus emphatically posited that for his generation (Matthew 23:29f). Once again, we have Isaiah 65 being applied to the first century, and to Israel.

So, we have a three-fold application of Isaiah 65 by Jesus and Paul to the first century generation and the events taking place then. But there is more, so let’s continue.

“Therefore I will number you for the sword, And you shall all bow down to the slaughter; Because, when I called, you did not answer; When I spoke, you did not hear, But did evil before My eyes, And chose that in which I do not delight.”
(Remember that Paul applied this to the Jews of his day in Romans 10:21).

As a direct result of Israel’s refusal to hear the Lord’s call – and remember how Jesus and Paul applied that discussion to their day YHVH said He would slay them with the sword! He would destroy them (except the remnant of v. 8). This raises an important issue, one that Frost knows is destructive to his view. He tries his best to play the “shell game” and pass it off, but, it will not go away. It is fatal to his still developing eschatology.

I made the point that Psalms 102 is a promise made to and about Old Covenant Israel after the flesh, as God’s Covenant people. I made the same point on Isaiah 24. The identical point is simply undeniable, as we are about to see. Yet, Frost says that I have not proven my case. Mind you, he has not offered a single word of actual textual and exegetical proof that Psalms and Isaiah 24 are not promises made to Old Covenant Israel. Just more bold assertions that prove nothing. I urge the reader to go back and actually notice the exegetical arguments that I offered and compare and contrast them with Frost’s mere denials and assertions.

But, what about Isaiah 65? Is it a promise made to Old Covenant Israel after the flesh, related to the passing of the Law of Moses, or does it relate to the end of time, as Frost now claims? Consider the following:

A. If Isaiah 65 is about the end of time, Frost must identify the people that will be guilty of spurning God’s call. He must prove that this people is the people that Isaiah had in mind, and it is not Israel of Paul’s day, as the apostle claimed in his application of Isaiah.

C. If Isaiah 65 is about the end of time, Frost must identify the people that will be destroyed, (Just as in Psalms 102 and Isaiah 24!!) when “the Lord God will slay you”? I venture to say that Frost will conveniently overlook this crux interpretum of the text and claim that I have not come close to proving my point. We shall see what we shall see.

D. Isaiah 65:13f – When the Lord destroyed the disobedient Jews who rejected His call, He would create a new people with a new name. (This is directly parallel to Psalms 102). This new people with the new name would enjoy the Messianic Banquet (which is nothing less than the promise of the resurrection of Isaiah 25:6-8– the time of Israel’s salvation!).

Once again, Frost must answer some questions:

☛ If Isaiah is about a yet future “end of time” who are the people of God that will be slain by the sword as a result of filling the measure of their sin?

☛ Who is the new people that will be created?

☛ What is the new name that will be given?

In other words, if Isaiah 65 is not an Old Covenant promise, made to Old Covenant Israel after the flesh, and if it is not about the end of her covenant existence, Frost needs to step up and show us – exegetically – who YHVH was describing in the text.

He must explain why both Jesus and Paul applied Isaiah 65 to Israel of their day.

He must show us – to reiterate – who the people are that will fill the measure of their sin, be destroyed, and a new people with a new name is then given.

If Frost follows his normal pattern, he will ignore these substantive issues and then simply assert, once again, that he has proven preterism wrong and that his “arguments” have not been answered.

In closing this installment, let me just say here that Frost’s objection about “the law” versus the “covenant” and his claim that the Mosaic Covenant has been fulfilled / removed, but that “the law” the wider Old Testament, remains in place is totally false. Frost’s confusion about the passing of the Law of Moses is incredible. And Isaiah 65 will falsify Frost’s dichotomization of the eschatological narrative. So stay tuned!