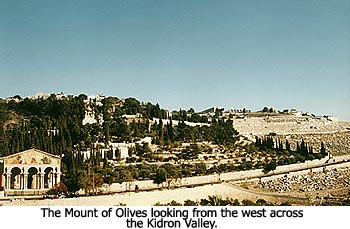 Zechariah 14: The Earthquake and the Parousia

And in that day His feet shall stand on Mount of Olives which faces Jerusalem on the east. And the Mount of Olives shall be split in two from east to west, making a very large valley; Half of the mountain shall move toward the north and half of it toward the south. Then you shall flee as you fled from the earthquake in the days of Uzziah king of Judah. Thus, the Lord my God will come and all the saints with You.” (Zechariah 14:4-5)

Zechariah 14 is typical of almost all of the Old Covenant prophets in expressing his vision in hyperbolic language. His vision of the siege of Jerusalem entails an “earthquake” of epic proportions. The Mount of Olives would be split from east to west and a great valley would be created in which God’s elect would escape his wrath against Jerusalem and the nations.

The dispensational view of this text is literalism in its crassest form. Pentecost refers to Zechariah 14 as proof that “a valley that is not in existence today shall come into being at the time of the second advent.” (Dwight Pentecost, Things To Come, (Grand Rapids, Zondervan, 1958)416-417). Walvoord, commenting specifically on the judgment of Babylon says, “it is hard to imagine a scene of greater worldwide disaster than is described.” (John Walvoord, Major Bible Prophecies, (Grand Rapids, Zondervan, 1991)357). While his comments are made about the earthquake to destroy Babylon in Revelation, he equates that quake with the prophecy of Zechariah 14.

On the other hand, many writers see that the prophecy of Zechariah 14, “is figurative, and was never intended to be taken literally.” (Frederick Carl Eiselen, The Minor Prophets, (New York: Eaton and Mains, 1907)680).

Zechariah 14 and Salvation Through Judgment – Not From Judgment

Another factor in the proper interpretation of Zechariah 14 is the idea of salvation coming through judgment– not salvation from judgment. King observed that one of the problems of those who demand a literal view of Zechariah is their failure to understand that Israel’s restoration would come at the time of Israel’s destruction. (Max R. King, The Cross and the Parousia, (Warren, Ohio, 1987)197-198).

Likewise, Elliot takes note of the fact that in the Dead Sea Scrolls, there is the belief that: “expectations of salvation and judgment are brought together. They are not separate experiences–salvation arises out of judgment.” (His emphasis) . Elliot says:  “It would appear that God not only saves from distress, but in some way also through the dangerous situation of judgment, perhaps even by means of the judgment as it functions as a kind of ‘discipline’ of the elect, or even as a kind of validation of their election.”– See also pages592 where in the imagery (in Jubilees), presents the righteous going through the waters of the judgment with the wicked, but the waters kill the wicked but save the righteous” (Mark Adam Elliott, The Survivors in Israel, (Grand Rapids, Eerdmans, 2000)586. This is a concept that our Dispensational friends seem to be unaware of.

In other words, while there were physical phenomenon to be seen in the destruction of Jerusalem, there was an inner unseen reality that was the core and focus of the prophecy. There is no need to see a physical earthquake, a literal valley of escape, a literal river of life, etc. And, when YHVH predicted the judgment of Jerusalem, lying behind that threat was also the idea of salvation. In scripture, salvation and destruction are two sides of the same sword. It is patently wrong to divorce these twin motifs from the Day of the Lord.

It is clear from the context that this coming of the Lord cannot be an “end of time” scenario. Escape would be possible. As Robinson said some time ago, commenting on Luke 17 and Matthew 24 when Jesus said,  “let those on the roof tops not come down”:  “Injunctions to hasty evacuation, however swift, are obviously futile in connection with a Parousia which is to come over the entire world like a flash of lightning.” (John A. T. Robinson, Jesus and His Coming, (Philadelphia, Westminster Press, 1979)74. This is clearly true, and means that one cannot apply Zechariah 14 to any sort of “end of time” coming of the Lord.

This language best fits Jesus’ description of the possibility of escape from the impending demise of the Old Aeon (Matthew 24:15)–“when you see the Abomination of Desolation…flee to the mountains.” See also Luke 17:31-37. In addition, there would be worship and service to Jehovah on earth after this parousia according to Zechariah 14. There would still be nations that would be both obedient and disobedient.

For the amillennialist, Zechariah 14 simply cannot be referent to any supposed end of time because it says “his feet shall stand on the Mount of Olives.” One of the most dearly held tenets of amillennialism is that Jesus will never set foot on earth again.

Two reasons are given for this belief:
1.) The earth will be destroyed, therefore Jesus cannot set foot on it again.
2.) The Bible supposedly teaches that he will only appear “in the air” 1 Thessalonians 4. (See Premillennialism: True or False, (Forth Worth Lectures, Winkler Publications,1978)43. Speaker Charles Coil. See also Furman Kearley’s speech)259).

This view is held to counter the millennial view that Jesus will return to earth to sit on David’s throne. The argument goes like this:

Zechariah 14 predicted the coming of the Lord in judgment when his feet would stand on the Mount of Olives, Zechariah 14:4.

But the Lord shall never set foot on earth at his Second or Final Coming. (Amillennial view).

Therefore Zechariah 14 does not predict the Second or  Final Coming of the Lord at the “end of time).  (As understood by the amillennialist. This will become increasingly significant as we continue our study of Zechariah 14! Of course, the Amillennial view assumes, without proof, that the earth will be destroyed!)

There are several major issues with the Amillennial and Dispensational views. The fact is that Zechariah 14 did predict the “final” coming of the Lord, but, it never predicted a literal, physical coming when Jesus would stand on Olives in a human form again.

It is interesting that Eusebius said Zechariah 14 predicted the coming of the Lord in the destruction of Jerusalem. As we saw at the outset of this series, historically, there has been a host of scholars who held this view.

However, Eusebius believed that the reference to standing on the Mount of Olives referred to the time when “our Lord Jesus, the Christ of God, had visited the olive-grove over against Jerusalem.”  (Eusebius, The Proof of the Gospel,  BK. VIII, Edited by W. J. Ferrar, (Grand Rapids, Baker, 1981)146). This is untenable. Zechariah’s prediction does not refer to Jesus’ incarnation/personal ministry. It speaks of his coming against Jerusalem and the nations. What we want to do now is to examine the motif of the earthquake, in Zechariah 14 and see how this concept is utilized in other prophetic texts. This should give us some solid insight.